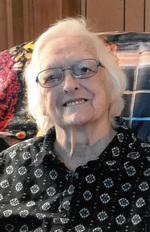 Bertha J. Perry, 91, of Kennebunk, died peacefully late Monday evening, July 22, 2019 at Gosnell Memorial Hospice House. She was born in Kennebunk on February 26, 1928, the daughter of Harold Lloyd Jackson and Mildred V. (Nunan) Jackson, and was the widow of Sherman L. Perry, Sr., who predeceased her in 1986. Bertha graduated from Kennebunk High School and was a lifelong Kennebunk resident.

As a housekeeper, Bertha worked for several local families and was a longtime member of the Kennebunk Mother’s Club.

Bertha and Sherman built their family’s summer camp in Brownfield and enjoyed spending summers there with all her children. Bertha was a very hard worker and self-sustaining, cutting and stacking her own firewood for the year. She had a quick wit, great sense of humor, and always had a smile on her face.

In addition to her husband, she was predeceased by two children, son Sherman Perry, Jr., in 2016, and daughter Gloria K. Howard in 2018.

There are no visiting hours. A Graveside Service will be held on Saturday, September 14, 2019 at 2:00 p.m. in Evergreen Cemetery, Kennebunk, where she will be laid to rest alongside her loving husband. Should friends choose, memorial donations in her name are encouraged to: Animal Welfare Society, PO Box 43, West Kennebunk ME 04094; or Gosnell Memorial Hospice House, c/o Hospice of Southern Maine, 180 U.S. Route One, Scarborough, ME 04074.

To share a memory or leave a message of condolence, please visit Bertha’s Book of Memories Page at www.bibberfuneral.com.