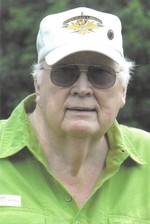 Dick graduated from Kennebunk High School in 1958 and then attended Portland School of Art for two years. He proudly served our country as a member of the United States Army, part of the NATO Firing Team. He was a Machinist for over 40 years and retired from Pratt Whitney.

Dick was an avid colonial historian with a keen interest in the French and Indian War. Fort Ticonderoga was a favorite destination where he took part in reenactments. He excelled at genealogical research and volunteered to help others do the same in the Genealogy Department at the Springvale Library. He was a self-taught artist who was accomplished in leatherwork, restoration of antique guns, building model ships, and painting. His knowledge was vast and deep and he enjoyed a good discussion and sharing information on any of these topics.

Dick enjoyed spending time with his friends and family at his camp on Kennebunk Pond where he was known to celebrate the Fourth of July with the firing of his muskets and cannons. He was a member of the Kennebunk American Legion for 43 years, Sons of the American Revolution, and Society of Mayflower Descendants. He was a true gentleman, a loyal friend, and was dearly loved by many.

A gathering of family and friends will take place from 11:00 AM – 1:00 PM, followed by a memorial service at 1:00 PM on Saturday, September 7, 2019 at Bibber Memorial Chapel, Kennebunk. Interment will take place at Evergreen Cemetery in Kennebunk.