To leave condolences for Anne Thompson's online memorial, sign in using one of the following options:

They lived in Lima until Wheeler graduated from the US Army Officers Candidate School (OCS), Ft Sill, Oklahoma in 1953. Wheeler served in Japan, Germany and Korea, returning to Ft Sill / Lawton as an instructor at OCS in 1960 with their four children; J Lawrence, Richard Dean, Barbara Roanne and Kathryn Marjene Wheeler.

Tragically, on 9 August 1965, a family car accident claimed the young lives of children Richard and Kathryn, while Anne sustained a lifelong leg injury. Her courage and determination to soldier on in support of her husband and remaining children were remarkable.

Then the sudden death of her husband on 30 Sept 1970 in an airplane accident, saw Anne move with daughter Barbara to Arlington, VA at the invitation of longtime family friend, LTC Edmund Randall Thompson. They married on 3 December 1971, taking on the not-so-small feat of nurturing a merged family of eight.

Anne’s military experience gave her a second chance to be the perfect first class Army wife to Ed who, over the next 13 years, was promoted to Major General and Assistant Chief of Staff for Intelligence based at the Pentagon and Ft Myer, VA. Together they traveled the world, representing the US Army Intelligence service, as well as hosted elaborate international events at Ft Myer for overseas counterparts and their families.

MG & Mrs. Thompson retired in 1984 to Kennebunk, Maine to live for more than 30 years in the home they built between the ocean and river, where Anne created a beloved family and friend summer harbor at the beach, as well as beautiful paintings and artwork in her third floor studio.

Through tragedy came triumph for the courageous and determined Anne, who loved and supported her family unconditionally. She enjoyed life, donning lipstick, nail polish and jewelry every day. She set a fine example of a strong, beautiful, capable woman and Army wife who never gave up or gave in to adversity. When life gave her lemons, she made lemonade, and it was always, elegantly, the very best.

A Funeral Service will be held on a future date (TBD) at Fort Myer Chapel, 204 Lee Avenue, Fort Myer, VA, followed by burial in Arlington National Cemetery next to her husband of nearly 48 years, dear Ed; together again - the ACSI & the MACSI.

To share a memory or leave a message of condolence, please visit Anne’s Book of Memories Page at www.bibberfuneral.com

Receive notifications about information and event scheduling for Anne

Print
A Funeral Service will be held on a future date (TBD) at Fort Myer Chapel, 204 Lee Avenue, Fort Myer, VA, followed by burial in Arlington National Cemetery next to her husband of nearly 48 years, dear Ed; together again - the ACSI & the MACSI.

Plant a Tree in Memory of Anne
Plant a tree 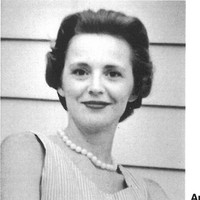