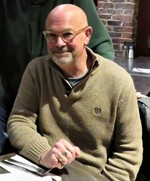 Brent Alan Varney, 59, passed away unexpectedly at his home in Wells the morning of November 11th. Brent was born March 15, 1961, in Bangor, the younger son of Clifford Almon Varney and Ellen Alpatina Lisheness. The family moved to Veazie where Brent spent his childhood. He was an inquisitive and mischievous kid who thought having a pet chicken that rode around on his shoulder was perfectly normal! He was also industrious and worked a variety of neighborhood jobs during his teen years.
Brent was a serious, successful student and graduated John Bapst in 1979. He participated in Drama, Glee, and Key Clubs, Boys State, and was a member of the National Honor Society. He graduated UMO in 1983, earned a medical technology degree, and started work at Maine Med in the phlebotomy lab before graduating. He worked there until 1997 and then went to UNUM, celebrating 22 years there just last week. Brent was well-respected, liked, and admired for the excellent work he did in disability claims and often won recognition for that work. He mentored trainees and was a source of advice and calm for many of his colleagues. He had many friends at both workplaces.
Brent loved living in Wells near the ocean with his husband, Steve. He adored animals and had 7 pets at the time of his death. He was a skilled gardener and beautifully landscaped yards of his homes. He had an eye for interior design and was a handyman around the house. He loved his home and was the happiest there. Brent couldn't resist owning nice cars, and his latest, a sporty Camry, earned oohs and ahhs when he showed it off!

Brent could be seen as quiet and shy, but he could also be the life of the party. Maybe it was some of the childhood mischievousness showing up in adulthood! He was genuinely kind, sweet, modest, and funny.
Brent met his husband in 1991 when both were on vacation in Ogunquit. They recently celebrated 29 years of love at first sight! In 2009 they moved to Wells after having lived in Portland and Gorham. Brent and Steve were married August 12, 2013, in the gazebo at Wells Harbor after gay marriage became legal in Maine. Memories were made on trips to Hawaii, England, Ireland, Scotland, and Wales with friends even though Brent would have preferred to stay home, but he did it for Steve! Life centered around home, family, the fur babies, and friends.
Preceding Brent in death were his parents and his brother, Jerald Varney.
Brent is survived by his husband, Stephen Fuller of Wells; daughter, LeBron James (Erin Fuller) of Eliot; grandson, Draiden Mason of Eliot; sister-in-law, Carole Varney of North Carolina; nieces, Kim Ryan of Bangor and Jody Varney of Hudson; mother-in-law, Pearl Fuller of Skowhegan; brother-in-law, David Fuller and Debbie of Albion; sister-in-law, Bettie Fuller and Randy Hartt of Vassalboro; and special friends - you know who you are. He is also survived by his beloved dogs Dooley and Keeley, and beloved cats Dusty, Mairead, Monkey, Rusty, and Elektra. They brought him much joy and comfort with their cuddles and unconditional love.
There will be no services. If you would like to honor Brent, donations can be made to Safe Haven Humane Society, PO Box 91, Wells, ME 04090 or to a charity or cause of your choice.
To share a memory or leave a message of condolence, please visit Brent’s Book of Memories Page at www.bibberfuneral.com