To leave condolences for Doris Phillips's online memorial, sign in using one of the following options:

Provide comfort for the family of Doris Phillips with a meaningful gesture of sympathy.

In the mid-1970’s, Dodie and Brian made the big decision to not just ‘summer’ in Maine but to live there permanently. This dream was realized in 1978 with the construction of an innovative 95% self-sufficient energy residence, featuring solar heat and a windmill, saving a previously eroding cliff at the same time.
In 1988, Dodie along with her close friend, Daisy Arnold started “Keys to the Kitchen,” a specialty gift store she ran until the business was closed in 2016. She was an active supporter of the Animal Welfare Society and was intimately involved in fund raising for the preservation of Laudholm Farm now known as the Wells Reserve at Laudholm.

In 1991, Dodie, to the great joy of Brian, became an American Citizen. An occasion noted on a personal level by a letter from President George H.W. Bush. Truth be told that while Dodie was an enthusiastic new American, she would want it known that she quietly always pulled for Canada in athletic competitions between the two countries.

She is predeceased by the love of her life, Brian Phillips, who died October 18, 2016.
Dodie is survived by her children; two daughters, Wendy Barrett (Rod) of Vero Beach, Florida and Tracy (Tammy) Phillips (Barry Smith) of Kennebunk, ME; two sons, Scott (Fern) of York, ME and Christopher (Kelli) of Rockville, MD, also by 9 grandchildren and 2 great grandchildren.

The family extends its deep and sincere appreciation to the caregivers for all of their loving and compassionate care during the last several years of Dodie's life.

A celebration of Life is being planned for this summer and will be announced by Bibber Memorial Chapel,

Receive notifications about information and event scheduling for Doris

Print
A celebration of life will be held this summer and announced by Bibber Memorial Chapel.

We encourage you to share your most beloved memories of Doris here, so that the family and other loved ones can always see it. You can upload cherished photographs, or share your favorite stories, and can even comment on those shared by others.

Plant a Tree in Memory of Doris
Plant a tree 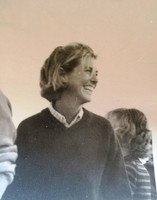