To leave condolences for Dr. William Chigas, DMD's online memorial, sign in using one of the following options:

Provide comfort for the family by sending flowers or planting a tree in memory of Dr. William Chigas, DMD

Provide comfort for the family by sending flowers or planting a tree in memory of Dr. William Chigas, DMD

Bill was born on November 14, 1933, in Lowell, MA, the youngest of three sons born to Greek immigrant parents Dr. George V. and Aristea Rhangos Chigas. Bill is a graduate of Lowell High School, where he was active in the Boy Scouts and played on the football team.

He continued his education at Tufts University and earned his DMD from Tufts Dental School in 1959. Upon his graduation, he joined the US Army, serving as a captain in the Dental Corps in Germany. He always considered his three-year tour in Germany as one of the best periods of his life.

After returning from Europe, he started a successful dental practice in Lowell and later moved to Chelmsford, where he stayed for 30 years until his retirement in 1991.

He and Margaret, his wife of 34 years, began their retirement in Moody, ME, in the early 1990s. They lived briefly in Savannah, GA, before returning to Wells and eventually making their home in Kennebunk.

A longtime member of Rotary, he initially joined the Lowell and Chelmsford Rotary Clubs and later served as president of the Wells Rotary Club. He was previously a member of Savannah South Rotary and at the time of his death Kennebunk Rotary Club. Bill was a rare member that attained a 50-year perfect attendance record.

In retirement, Bill enjoyed woodworking and has created many pieces of fine furniture over the years. He loved classical music and was a patron of the Portland Symphony Orchestra.

He is survived by his wife Margaret Chigas of Kennebunk, two sons George Chigas of Acton, MA, and Charles Chigas of New York, NY, two step-daughters Katie Ramage of Escondido, CA, and Barbi Ramage of Ashville, NC, as well as four grandchildren; John and Arthur (George’s children); and, Olivia and Sebastian (Charles’ children), as well as several nieces and nephews.

Receive notifications about information and event scheduling for Dr. William

Donations are being accepted for: Rotary Club of Kennebunk.

We encourage you to share your most beloved memories of Dr. William here, so that the family and other loved ones can always see it. You can upload cherished photographs, or share your favorite stories, and can even comment on those shared by others.

Posted Apr 06, 2020 at 07:02pm
I am so sorry for your loss Margaret. I just learned of this. He was a wonderful friend and such a good and generous man. I loved my time in our violin lessons, and greatly valued his opinion and the many fine conversations we had over a glass of wine. We will all miss him so. -- Keith Fletcher
Comment Share
Share via:
IT

Posted Feb 15, 2020 at 07:21am
Always enjoyed the company and comradery of Bill.
So sorry for your loss, Margaret and Family.
Ina Toth and Family

Posted Feb 14, 2020 at 10:18am
. Although we have not been in touch lately we have such fond memories of our times with you and Margaret ,
Charles and Jackie, and Paul and Wanda.
Our thoughts and prayers go out to Margaret and your family.
RIP Bill
Judy and Patrick Clarke.
Comment Share
Share via:
BH

Posted Feb 12, 2020 at 02:35pm
My sympathy to the entire Chigas family.
His son George was a dear friend to my brother Ray Mercier, who passed away in 2013 and I know Ray truly admired Dr. Chigas and his kindness over the years.
I first met Dr. Chigas in 1989, the first year women were allowed to Join Rotary clubs. Dr. Chigas invited me to attend a "Fire Side Chat" about Rotary at his home on High Street in Chelmsford. Dr. Chigas, along with the other Rotarian's there, made me feel welcome and I was honored to be able to join the Chelmsford Rotary Club. He was a great leader in our club and has been missed since his move to Maine.
It was an honor to know him and I am sure he will be missed by many!
Lynn (Mercier) Marcella
Chelmsford, MA
Comment Share
Share via: 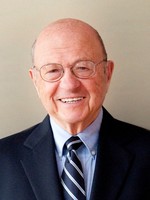