To leave condolences for Elaine Hatch's online memorial, sign in using one of the following options:

Provide comfort for the family of Elaine Hatch with a meaningful gesture of sympathy.

Print
Elaine E. Hatch passed away peacefully on Friday, January 31st at the Gosnell Memorial Hospice House in Scarborough at the age of 84.

She was born in Boston on September 23rd, 1935, to Alfred Hynes and Agatha (Varrecchio) Hynes. At age ... Read More
Elaine E. Hatch passed away peacefully on Friday, January 31st at the Gosnell Memorial Hospice House in Scarborough at the age of 84.

She was born in Boston on September 23rd, 1935, to Alfred Hynes and Agatha (Varrecchio) Hynes. At age nineteen, she married Nelson Hatch and for 24 years raised two children together at their home in Kennebunk. Elaine took pride in being a homemaker and enjoyed spending time with her husband and family at their camp on Bauneg Beg Lake in Sanford. In 1976 she moved to Wells in order to care for John and Grace Kimball and in 1989 moved to Deerwood Park in Wells. Since 2006 she lived at Simpson Meadows in North Berwick where she made many friends for whom she was deeply grateful.

Elaine was a caring person and for this reason many people thought of her as a second mother or grandmother. Her door was always open to anyone who wanted to come in; she would do anything she could to help someone she knew was in need. Friends and family remember her baking pies, faithfully writing them notes on their birthdays, painting pillowcases for them, or just spending time with them. She lovingly called everyone “Darlin’,” so much so that her great-grandchildren made that her name. She will be sorely missed.

The family would like to extend a very special thank you to the staff at Gosnell Memorial Hospice House for the care and compassion provided to Elaine.

Friends and family are invited to gather for a time of visitation on Monday, February 3rd at Bibber Memorial Chapel, 111 Chapel Rd., Wells from 5:00 PM to 7:00 PM. A Mass of Christian burial will be celebrated on Tuesday, February 4th at 2:00 PM at St. Mary’s Catholic Church, 236 Eldridge Rd., Wells. Interment will follow at Ocean View Cemetery.
Read Less

We encourage you to share your most beloved memories of Elaine here, so that the family and other loved ones can always see it. You can upload cherished photographs, or share your favorite stories, and can even comment on those shared by others.

Posted Feb 15, 2020 at 11:38am
I briefly took care of Elaine in rehab. I am so saddened by this loss. In such a short time she made a huge impact on me.
My condolences to all of the family and friends of Elaine. She was such a bright light and the world is a whole lot less beautiful with her in it.
-Peaches
Comment Share
Share via:
RD

Posted Feb 05, 2020 at 06:49pm
To all of Gram’s family,
I’m really sorry about Gram’s passing. She was a really special woman with a huge heart. I’m a better person for knowing her.

Thank you Rick My Mum always thought the world of you, Rick. We definitely have some great memories to hold onto, don't we?

Posted Feb 03, 2020 at 10:25am
wish I could be there as well to support everyone and give everyone hugs.I to always received her cards,and many walks on the beach,conversations on everyone in town and in the family.She was able to remember everything and reached out to everyone.Wonderful smile and great hugs.The cabin on the lake,the big white house in down town,her house that she got all alone,and all she did for her family She was a gracious women and I will remember her always with a huge smile.
Comment Share
Share via:

I will plant a tree in her memory :)
M

Thanks Wendy for your comforting words at this difficult time. Aunt Elaine I know knew you were thinking of her. Mum will be missed by so many. We will see her again. Hugs to you too, Cuz

Aunt Elaine knew you were there in spirit. Mum will be missed by everyone that knew her. You know the heartache when your Mom died, that will never go away, but We will always have. All our special memories to hold close to our heart, Until we see them again.
GC

Posted Feb 02, 2020 at 07:27am
My condolences to Karen, Martha and their families. I have such wonderful memories of the old neighborhood and your mom. She always had a smile and something wonderful baking in the oven. My thoughts and prayers to you both.
Comment Share
Share via:
MM

We sure did have some fun times and these are the memories we will hold close to our hearts forever. 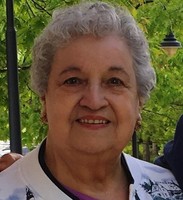 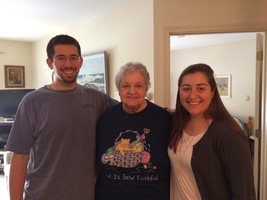 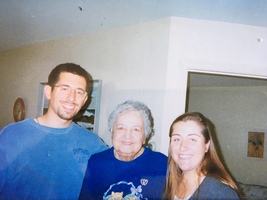 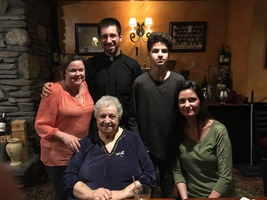