To leave condolences for Evelyn Eble's online memorial, sign in using one of the following options:

She was born Julia Evelyn Shebak on November 9, 1917, in Williamsburg, MA, one of five children of the late Ignacy and Christina ... Read More
Evelyn S. Eble passed away peacefully on June 16, 2020, at her home at Atria of Kennebunk, ME. She was 102.

She was born Julia Evelyn Shebak on November 9, 1917, in Williamsburg, MA, one of five children of the late Ignacy and Christina (Borasewiecz) Shebak, who had immigrated five years earlier from “White Russia” (now Belarus). For more than half her life, she lived in the Village of Florence in Northampton, MA, where she graduated from St. Michael’s High School and attended Northampton Commercial College. She worked at DA Sullivan and Sons Construction in Northampton, Pro Brush in Florence, and later at Hardigg Industries in South Deerfield, as a Secretary/Administrative Assistant, while married to Raymond “Sport” O’Neill and raising their three children. She is still remembered fondly by many of her children’s friends, who considered her house on Straw Avenue their second home. She was a communicant at Annunciation Parish in Florence.

In the mid-1970s, following a divorce, she moved to Glenside, PA, and married Louis M. Eble, Jr. There, she was a member of North Hills Country Club, where she played fine golf, and killer bridge. They were members of Christ’s Lutheran Church in Oreland, PA.

Mr. Eble died in 1994, and she continued to live in Pennsylvania until 2011, when she moved to Kennebunk. She was a voracious reader, enjoyed watching the Patriots’ Tom Brady, and was heartbroken when Mookie Betts left the Red Sox—but the supreme love of her sports fandom was tennis great Roger Federer.

Evelyn was preceded in death by her first husband, Raymond E. O’Neill, her husband Louis Eble, and by her brothers Michael, Joseph, Peter, and Thomas Shebak. She is survived by her children: Evelyn (O’Neill) Tonneson and her husband H. Richard Tonneson, Kennebunkport, ME; R. Paul O’Neill and his wife Susan (Kramer) O’Neill, Brooklyn NY; and Christina O’Neill, Whitingham, VT; her grandchildren Beth (Tonneson) Fossett and her husband Tim Fossett, Kennebunk; Kym O’Neill, Brooklyn; Kramer O’Neill and his wife Alice Moscoso, Paris, France; and Kel O’Neill and his wife Eline Jongsma, Amsterdam, The Netherlands. She also is survived by six great-grandchildren (Grey and Beckett Tratenberg, Mary Fossett, Raphaël Moscoso O’Neill, Isadora and Seraphine Jongsma O’Neill), and four of Mr. Eble’s five children and their families. She also leaves behind the wonderful staff of Atria Kennebunk, who so lovingly provided the “assistance” in Assisted Living.

Her remains will be interred in Whitemarsh Memorial Park in Ambler, PA. A celebration of her life will be planned for a later date. Donations may be made in her memory to the Kennebunk Free Library in Kennebunk, Maine.
Read Less

Receive notifications about information and event scheduling for Evelyn

You will receive any future notification messages.
Print
Her remains will be interred in Whitemarsh Memorial Park in Ambler, PA. A celebration of her life will be planned for a later date. Donations may be made in her memory to the Kennebunk Free Library in Kennebunk, Maine.

We encourage you to share your most beloved memories of Evelyn here, so that the family and other loved ones can always see it. You can upload cherished photographs, or share your favorite stories, and can even comment on those shared by others.

Posted Jun 29, 2020 at 10:36am
Evelyn & Family,
I was so sorry to read of your mom's passing. She was such a great lady and I so enjoyed talking with her, whether about sports or her books. She had definite opinions about what she liked in her books and what she did not, and I was always keen to hear what she had to say about my choices for her. Sometimes it was a hit, and sometimes a big miss. We always had fun chatting about them anyways. She will be sorely missed by all who knew her.
With deepest sympathy,
Carol Whitten
Comment Share
Share via: 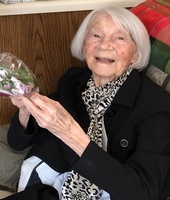