To leave condolences for Genevieve Tirrell's online memorial, sign in using one of the following options:

Print
Genevieve M. Tirrell passed peacefully at the age of 87 on October 24, 2019 at St. Andre Healthcare in Biddeford, ME.

Genevieve was born in Boston, MA on September 10, 1932. She was the daughter of the late Raymond C. Leach and the late... Read More
Genevieve M. Tirrell passed peacefully at the age of 87 on October 24, 2019 at St. Andre Healthcare in Biddeford, ME.

Genevieve was born in Boston, MA on September 10, 1932. She was the daughter of the late Raymond C. Leach and the late Helen J. Leach of Waltham, MA. One of 15 children, she is survived by brothers Raymond, Peter and James.

Genevieve was the widow of the late Talmage Tirrell of Plymouth, MA. They enjoyed a peaceful life at their waterfront home in Plymouth. She also lived at Pine Hills Village in Plymouth for many years and she was formally of Natick, MA where she raised her family. She lived her last years at the Farragut in Kennebunk and Avita of Wells. Many thanks to the staff at Avita.

Genevieve enjoyed travel, gardening, bowling and her time working for Catholic charities. She loved visiting and helping her many brothers, sisters, nieces and nephews. She was a most beloved Aunt.

In lieu of flowers, donations may be made in Genevieve’s name to A Place to Start at www.aplacetostartfordementia.org
Read Less

We encourage you to share your most beloved memories of Genevieve here, so that the family and other loved ones can always see it. You can upload cherished photographs, or share your favorite stories, and can even comment on those shared by others.

Posted Oct 28, 2019 at 06:13pm
Barry and Family,
I'm sorry for the loss of your Mom, she was a wonderful person and will be missed by everyone who knew her. Also so very sorry that I cannot be there in person to convey my condolences. Though I may be far away, please know that my thoughts are with you and your family. May my Aunt Genevieve rest in peace.
Love, Donna Whitney
Comment Share
Share via:
MR

Posted Oct 28, 2019 at 03:27pm
When I think of you Dear Aunt, it will always be with love and admiration. You filled our family with joy. You were always wanting to take care of things for all you loved. How willing you always were to help everyone out...Always. You loved when our giant family got together and shared laughter and hugs. People are amazed that 15 children and 68 cousins were happy to get together always. What a tribute to all of you. I am grateful to your son Barry for taking such great care of you. Your work here is done. We will miss you terribly but know you were welcomed by all who went before you. I will miss my visits and my drive to Maine, but know you will continue to watch over me. I love you Aunt Gen and I am so grateful for a lifetime of your love. MaryCarol
Comment Share
Share via: 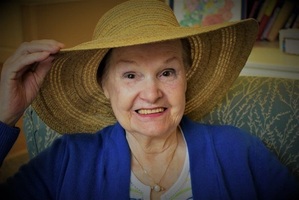