To leave condolences for George Parker's online memorial, sign in using one of the following options:

George joined the U.S. Army when he was 17 and served our country during the Korean War. He was a self-employed Truck Driver specializing in long hauls for his entire working career. He married Natalie Pearl Clark April 1, 1950 in Camden, ME. He was a people person who everyone loved. He enjoyed fishing, hunting, vegetable gardening, and animals.

A graveside service will be held at a later date at Southern Maine Veteran’s Cemetery in Springvale.
Read Less

Everyone From Wells Elementary School

Posted Feb 29, 2020 at 10:49am
This tree is in memory of George Parker, our friend and coworker's Dad. Thinking of you Deb and family. With Love , Friendship, and Sympathy, 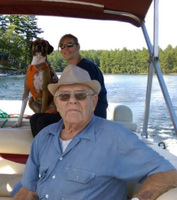