To leave condolences for Glenn Carter's online memorial, sign in using one of the following options:

Glenn was born on September 30, 1935, in Bath, ME, the middle... Read More
Glenn Malcolm Carter, 84, of Alfred, ME, formerly of Somerset, MA, died peacefully Monday evening, March 30, 2020, at Pinnacle of Sanford following a period of failing health.

Glenn was born on September 30, 1935, in Bath, ME, the middle child of three born to parents Harold and Inez Carter. Glenn is a graduate of Bath High School, where he was a business student and played on the baseball team.

Upon his graduation, he joined the US Navy, serving as Chief Petty Officer- Pipe Fitter for 20 years in places such as Guantanamo Bay, Cuba and Newport, RI. He married his wife Lydia and soon had a family with three children.

After serving in the Navy, his family moved to Somerset, MA, where they lived for over 20 years while he was employed at General Dynamics in North Kingstown, RI as a supervisory welder constructing Trident military submarines.

He and his wife of over 61 years decided to move back to Maine where they grew up and resided in Alfred, ME, since the early 2000s.

Glenn enjoyed hobbies such as being a locksmith and collecting coins. He was a loving father and grandfather with a great sense of humor.

Glenn is predeceased by his son, Michael Carter, and his sister, Penny Hass.

He is survived by: his wife Lydia; his sister Claudia Williams of Venice, FL; daughter Melissa Leen and her husband Frank of Corinna, ME; daughter Glenna Hoyle and her husband James of Hyattsville, MD; and grandchildren Jonathan and Justin Drapeau, and Jeremy and Brittany Hoyle.

A private memorial service with military honors will be held with family and friends.

To share a memory or leave a message of condolence, please visit Glenn’s Book of Memories Page at www.bibberfuneral.com

Receive notifications about information and event scheduling for Glenn

Print
A private memorial service with military honors will be held with family and friends.

We encourage you to share your most beloved memories of Glenn here, so that the family and other loved ones can always see it. You can upload cherished photographs, or share your favorite stories, and can even comment on those shared by others.

Posted Apr 09, 2020 at 01:16pm
So sorry to hear of the passing of Uncle Glenn. He was a loyal husband and father and a lot of fun to have as my uncle. Love, Jane
Comment Share
Share via:
K

Posted Apr 02, 2020 at 08:51am
Our condolences to Glens family. Glen was a special guy and a joy to have as a neighbor we will miss him and his special sense if humor. Rich and Irene Knight
Comment Share
Share via:
PK

Glenn and Lydia were neighbors of ours for many years. He was a help to my husband many times,and he always had a great sense of humor. Our condolences to his family!Peter and Priscilla Kenney! 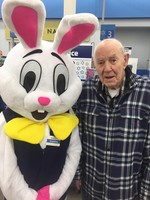