In Memory of
Harriett S.
Eaton (Stone)
1923 - 2020
Click above to light a memorial candle.
Memorial Candle Tribute From
Bibber Memorial Chapel
"We are honored to provide this Book of Memories to the family."
View full message >>>
Plant a Tree In Memory of Your Loved One
Click Here
Menu 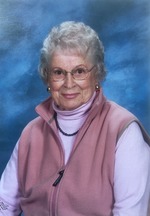 Harriett Elizabeth Stone Eaton of Langsford Road, Cape Porpoise, passed away in the early evening of January 26th, 2020. Born 13 December 1923 on Staten Island, New York, Harriett was one of two daughters born to Charles Lincoln Stone and his wife Daisy Lillias Nunan Stone. Harriett graduated from Curtis High School in Westerleigh, Staten Island, later graduating from Presbyterian Hospital School of Nursing in 1947. As an RN, she worked as the private nurse of the well-known author Kenneth Roberts, as well as a few others.

Harriett’s connection to Maine came via her grandparents who lived in Cape Porpoise as had their forbearers. Each summer when school was out, she would board the train in NYC and travel to the Maine coast.

On one of the Maine vacations, Harriett met Fred Miles Eaton, Jr., whose father Fred Miles Eaton Sr operated a wholesale lobster business in Cape Porpoise. The couple married on 20 November 1951 and remained inseparable for 45 years until Fred’s death in February of 1996. For all of those 45 years, plus 24 more years after Fred’s passing, Cape Porpoise and more specifically, Langsford Road was “home”. It was always Harriett’s desire to have her final days end “at home” too. Harriett remained in the family home on Langsford Road until just a few months before her passing.

Harriett was known in the community for her participation with the “Church on the Cape”, and her endless acts of kindness helping others in need, often the elderly or those enduring end of life struggles. In addition, she was known for one other thing… her carrot cake. I think some would argue her creation might have achieved carrot cake perfection. That, however, can be decided by others.

The family would like to extend thanks to all who helped Harriett in her later years. Special thanks go to Susan Cooper, Chantel Grugnale, Rick and Nancy Spencer, Rita McCall, Roberta Sanborn and Deb Parsons.

According to her wishes, Harriett will be cremated with her ashes scattered with those of her husband and her parents in Cape Porpoise Harbor. A memorial service is being planned for the summer. In lieu of flowers, donations can be made to Hospice of Southern Maine, 180 US Route One, Scarborough, Maine 04074, or, The Church on the Cape, P.O. Box 2740, Kennebunkport, ME 04046.