To leave condolences for James Pastorelli's online memorial, sign in using one of the following options:

James Francis “Jim” Pastorelli II, 100 years young, went home to Heaven on Friday, 4 September 2020 at his residence in Kennebunk after a long and rewarding life. He was born at home in Chestnut Hill, Newton, MA on 22 ... Read More
Kennebunk, ME

James Francis “Jim” Pastorelli II, 100 years young, went home to Heaven on Friday, 4 September 2020 at his residence in Kennebunk after a long and rewarding life. He was born at home in Chestnut Hill, Newton, MA on 22 August 1920, a son of John Victor Pastorelli, Sr. and Geraldine Agnes (Barry) Pastorelli. He grew up in the Newton area and graduated from Boston College High School in 1938.

A Veteran of World War II, Jim proudly served as an Enlisted Soldier in the United States Army. As part of the 71st Infantry Division, 14th Infantry Regiment and finally with the 3rd Military Government Regiment, he fought in France, Germany, and Austria in the European Theater of Operations, rising to the rank of Sergeant. For his exemplary service, he was awarded the Bronze Star Medal, Good Conduct Medal, American Campaign Medal, European-African Middle Eastern Campaign Medal w/two Bronze stars, World War II Victory Medal, Army of Occupation Medal, and the Combat Infantry Badge. Following the cessation of hostilities, he served as an NCO Administrator of the Military Government Detachment G235 in Rosenheim, Germany, and served as a German interpreter, returning home in March of 1946.

Following his discharge from the Army. Jim attended Boston College. In 1948, he married the love of his life, Vernita Mary Macdonald from PEI, Canada. They enjoyed 61 wonderful and blessed years together until her death in 2010.

Beginning in 1950, Jim started a lifelong career in the auto industry and worked for several automobile manufacturers and dealerships in the Boston and Brookline areas until 1968, when he moved his family to Kennebunk, ME. He established and operated Coastal VW in Saco, and then added a Subaru dealership in 1976. He ran both dealerships until 1982, when he retired and sold the businesses.
Jim was a devout Catholic, serving his Lord in several ministries. He was both a Lector and Eucharistic Minister at St. Martha’s Church in Kennebunk for over 50 years. Jim was also a long-time member of the Knights of Columbus Council 12033 in Kennebunk.

Jim is predeceased by his parents, his loving Wife Vernita, his son David L. Pastorelli, his brother John Victor Pastorelli, Jr. and his sister Geraldine A. Gable.

The family would like to express appreciation to Dr. Michael Festino, his physician for nearly 50 years, the Nurses and Assistants of Hospice of Southern Maine, and the Staff / Caregivers of Comfort Keepers of Scarborough, ME who took loving care of Jim these last few months.

Visiting hours will be held 1-4 PM Sunday, September 27, 2020 at Bibber Memorial Chapel, 67 Summer Street, Kennebunk. A Private Mass of Christian Burial will be celebrated at Holy Spirit Parish / St. Martha’s Church, Kennebunk. Burial with Military Honors will follow in Hope Cemetery, Kennebunk, where he will be laid to rest alongside his loving wife.

Should friends choose, memorial donations in his name are encouraged to: Friends of Hope Cemetery & Woods, P.O Box 1550, Kennebunk, ME 04043.

To share a memory or leave a message of condolence, please visit Jim’s Book of Memories Page at www.bibberfuneral.com.

Posted Sep 14, 2020 at 11:15pm
I always appreciated how kind he was to me when I was new to the parish, and we were both lectors at St. Monica’s back in the day.
Comment Share
Share via:
PM

Posted Sep 14, 2020 at 08:50am
Nancy and I share similar feeling about Jim. We know Jim as a kind man, a good man, a spiritual/Mass loving man. We respected him very much. He led a long, holy life and goes to God as a soon-to-be saint. Peter McNelis
Comment Share
Share via:
MS

You and Yours are in my heart. I count myself lucky to have met your Dad, and to have been inspired by his faith and tenacity. What a legend! A century wasn't enough, but I'm glad that he has now seen the face of God, and now rests easy. All my Love to You.
Comment Share
Share via:
DS

Posted Sep 13, 2020 at 07:18am
To Our Dear Friend Jimmy-
Paula and I just read the news about your Dad. While we haven't connected in a very long time, we were immediately brought "home" to many happy times we spent visiting with your family there at the house in Kennebunk, dinners when everybody talked at the same time, with spirited debates and roars of laughter! We first met back at UMaine Orono (Go Black Bears!) and recall so much fun from the Bear's Den to Dock Square. Always present we could see the example of your parents....just great people. So sorry to hear of your loss -- but we are heartened to know your you and your family are truly blessed !! We will be in touch dear friend!

Sending all our love, 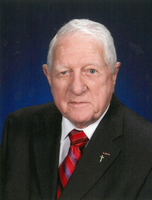