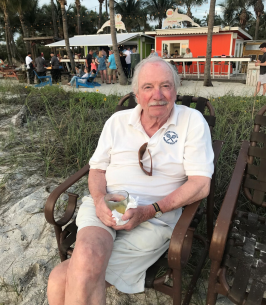 James F. Smith, beloved husband, father, father-in-law, grandfather and great friend to many died at his home in Kennebunk, Maine on September 1 surrounded by his loving family. He was 86. Born May 15, 1936 in Saugus, MA Jim had a life filled with purpose, meaning and accomplishment.

Jim grew up in Saugus, MA, attended Bentley College and had a career in the utility business in Boston before moving to New York as Chairman and CEO of Orange and Rockland Utilites. At Orange and Rockland, at the invitation of Governor Mario Cuomo, Jim became a member of the New York State Council on Fiscal and Economic Priorities. He also served on The Governor’s Policy Steering Committee for Science and Engineering Education, Research and Development. As a utility executive, Jim focused his attention on initiatives to help preserve the nation’s natural resources and to protect the region’s environment while serving on the Advisory Council of the Trust for Public Land.

While in NY he was also Chairman of the Board of the Tuxedo Club, he led fundraising for the United Way of Orange County, and was Chairman of Arts Day in Albany, leading a coalition of business people, artists and arts organizers to secure adequate funding for the arts.

Over the years Jim’s passions were many. He began playing the piano when he was seven years old, and later played in several local bands throughout the North Shore of Boston. He once entertained thoughts of becoming a professional musician. He modestly said he wasn’t good enough, but those who heard him play knew otherwise.

Jim is known for many things. He had a reputation for his impeccably stylish dress. At the gym, he became known as the gentleman working out in a starched long sleeve shirt and pleated slacks with matching socks. He often was seen driving his wife in his shiny red car to the grocery store where he would fill his own cart with his favorite foods which he then dropped into the food pantry box on his way out.

He loved his Black Label scotch before dinner and his love of fine dining led him to seek out and collect exquisite wines for the dinner table. This grew into a lifetime passion, one to the benefit of all his family and friends.

Jim had a bright mind and a sharp wit. His knowledge of history was profound and his memory keen. He could give you the dates and background of every war throughout history and also tell you who won the World Series in any given year with details of the outstanding players to follow. He would finish the NYT Crossword Puzzle daily in record time and then move on to his voluminous collection of crossword puzzle books throughout the day. Never enough crosswords!

To Jim, family was everything. He body surfed in the ocean faithfully and taught his grandchildren to do the same. He took great pleasure in travel, taking his family all over the world by plane, by boat, by car, by train. He loved to set off on new adventures with his whole gang in tow. Pups greeted them all with fist bumps and nicknames. Megsy, Scuberry, Rip, Gov, Bluebird of Happiness, Simsy and Duke. He would always end his emails and texts to them with emoji’s of flowers and hearts.

After residing in Lynnfield, MA for 20 years and then in Tuxedo Park, NY for 25, Jim enjoyed his days in retirement with Meg by his side at his homes in Boston, MA, and Captiva Island, FL, but Jim loved nothing more than caring for his roses or sitting on his porch in his Kennebunk, ME home looking out over the water, and in cooler weather by his fireplace, awaiting the next visit from family and friends.

Jim was predeceased by his parents, Jim and Marion (Huckins), sisters Jean Buckley and Claire Kane, and his son J. Gregory Smith.

He is survived by his wife of 59 years, Margaret (Frame), his daughter Ellen Scott and her husband Stuart of Wellesley MA, his daughter-in-law Emily Smith of Cape Elizabeth, ME and by his four amazing grandchildren, Sophie and Juliet Scott of New York City, Nate Smith of Portland, ME and Elias Smith of Cape Elizabeth, ME.
A Mass of Christian burial will be held on Saturday, September 17, at 11am in St. Martha’s Church, 30 Portland Rd, Kennebunk, ME. Private interment at Hope Cemetery, Kennebunk.

In lieu of flowers, gifts in Jim’s memory may be made to Hospice of Southern Maine, 390 US Route One, Scarborough, ME 04074 or https://hsm46624.thankyou4caring.org/sslpage.aspx?pid=298

To share a memory or leave a message of condolence, please visit Jim’s Book of Memories Page at www.bibberfuneral.com