To leave condolences for John Ladderbush's online memorial, sign in using one of the following options:

Print
John (Jack) Henry Ladderbush passed away in his home surrounded by his family on March 30, 2020, following a valiant battle with lung cancer.

Jack was born in Salmon Falls, NH on June 28, 1939, the son of William and Gabrielle (Roberge) ... Read More
John (Jack) Henry Ladderbush passed away in his home surrounded by his family on March 30, 2020, following a valiant battle with lung cancer.

Jack was born in Salmon Falls, NH on June 28, 1939, the son of William and Gabrielle (Roberge) Ladderbush.

Jack is pre-deceased by his brothers William and Richard, and his sister June (Geoghan).

Jack is survived by his loving wife of sixty years, Jean (Wright); daughters Julie (Hubbard) and her husband Dale, Jodie (Walsh) and her husband Jonathan; grandchildren Lydia Lehoux and husband Michael, Mitchell Perkins, Jackson and Jonathan Walsh; his great-grandchildren Elouise, Emelia, and Everett Lehoux; his sister Joan; and many nieces and nephews.

Jack grew up in Moody Beach, ME. He was a 1957 graduate of Wells High School. Jack was a self-employed General Contractor for over fifty years. He had a tireless work ethic and never retired. Jack was honest, knowledgeable, and reliable in his job. He forged many close relationships and lifelong friendships with those he did work for, from business owners, to local and seasonal residents alike. Many of these relationships span generations.

Jack was known for his sarcastic humor and truly enjoyed the banter with his buddies, especially while playing golf and cribbage. Jack will be dearly remembered by his family and close friends for his special knack and love of caring for babies and young children. He treasured time with his grandchildren and great-grandchildren.

A private graveside ceremony followed by a celebration of life will be scheduled at a later date.

Donations may be made to Seacoast Cancer Center at https://www.wdhospital.org/wdhf/giving/donate-now
Read Less

Print
A private graveside ceremony followed by a celebration of life will be scheduled at a later date.

Donations are being accepted for: Seacoast Cancer Center at Wentworth-Douglass Hospital.

Posted Apr 04, 2020 at 07:57pm
My sincerest condolences to the Ladderbush Family. Jack was not only kind, he was a gentleman of the 'old fashioned' variety and such a talented carpenter. He is a deep loss to the fabric of the old Ogunquit community. Karen Maxwell.
Comment Share
Share via:
RS

Posted Mar 31, 2020 at 10:10pm
RIP Jack, rarely will there be anyone that fought as hard he did. Adored by his family, loved by his friends. He will be missed dearly
Comment Share
Share via:
TB

Posted Mar 31, 2020 at 07:29pm
My uncle Jack always teased me. Even when I grew up!! A dear memory from childhood ~ I have a lot of freckles and he told me that I got them because I stood too close to the screen door and a cow s h i t on me. Then he would howl and laugh his butt off. I absolutely love this memory and I can still hear him in my memory. Love you and miss you uncle Jack.
Comment Share
Share via: 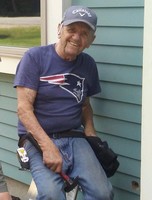