To leave condolences for John Middleton's online memorial, sign in using one of the following options:

Provide comfort for the family of John Middleton with a meaningful gesture of sympathy.

To share a memory or leave a message of condolence, please visit John’s Book of Memories Page at www.bibberfuneral.com

Print
There are no services currently scheduled.

Plant a Tree in Memory of John
Plant a tree
2 trees have been planted in memory of John Lee Middleton Jr.
EL

Posted May 07, 2020 at 09:03am
"Tad" and Margie attended our wedding in May of 1988. I have very fond memories visiting them in Kennebunkport circa 1998 and Tad hosting us and our then 3 year old son at the Trolley Museum. We are sad to hear of Tad's passing.

Posted Apr 13, 2020 at 10:40pm
I am so sorry to hear about Tad he was a wonderful man I thought a lot of both he and Marge I enjoyed my many talks with them over the years they were both very interesting people
Sending my deepest Condolences to David and his brothers
Nancy Meehan
Comment Share
Share via:
ML

Posted Apr 12, 2020 at 09:48am
Please accept our most heartfelt sympathies for your loss... Our thoughts are with you and your family during this difficult time.

Posted Apr 12, 2020 at 09:45am
I am so saddened to learn of Mr. Middleton's passing. I feel lucky to have had the pleasure of knowing him. He was a true gentleman. Our condolences to his family, sending love & light. We will miss him dearly. Much love, Merrilee Paul & all his friends at 50 Local.
Comment Share
Share via:
BT

Posted Apr 04, 2020 at 10:37am
I knew John from the Highwood Barn, where I spent a lot of time cleaning trolley cars. He would give me rides in his Toyota and he shared a cupcake with me on his 94th birthday last September. Whenever we saw each other at the the museum we would say hi, and he would give me a hug. He was so nice to me - he will be missed. I really liked John.
Colonel B Tirrell
Comment Share
Share via: 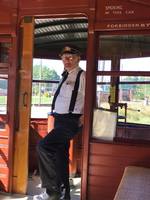