To leave condolences for Larry Thompson's online memorial, sign in using one of the following options:

Dr. Larry Clark Thompson, 85, passed away peacefully with family at his side in Scarborough, Maine on September 15, 2020.

Dr. Larry Clark Thompson, 85, passed away peacefully with family at his side in Scarborough, Maine on September 15, 2020.

Larry (not Lawrence) was born June 13, 1935 in Hoquiam, Washington. The eldest of three brothers, he was raised in this hardworking mill town during the Great Depression and World War II, fostering in him a spirit of self-reliance and improvement. He stood out as a young man for his curiosity and tremendous intellect, as well as his athletic ability — most notably as a champion pole vaulter in the days of the steel pole and sawdust landing pit. In hospice, he shared an image of himself vaulting through the air as a collegiate competitor with “very good” form.

Larry was Salutatorian of his high school class and continued his exceptional academic achievement at Willamette University and the University of Illinois at Urbana-Champaign, where he trained as an inorganic chemist. After completing his PhD program in unprecedented record time, he joined the chemistry faculty at the University of Minnesota-Duluth (UMD). For the next 43 years, Professor Thompson was an outstanding friend, colleague, mentor, leader, and teacher. He was a key part of the Chemistry Master of Science degree program, established in1964, and taught General Chemistry and Physical Chemistry, as well as Inorganic Chemistry courses. During his career, Professor Thompson became known internationally as an expert in the coordination chemistry and spectroscopy of Rare Earth elements and spent significant time collaborating with lanthanide researchers around the world, most notably his Brazilian colleagues, and published numerous research papers. Besides his students and colleagues, he was also proud of his state-of-the-art high-resolution McPherson RS-10 fluorescence spectrophotometer. He made significant leadership contributions to both UMD and the Chemistry Department during a time of tremendous growth, including service in the capacity of Department Head for 13 years. He was revered by his students and colleagues for the rigor of his courses, his enrapturing chemistry stories, and his generous mentorship. Larry was especially committed to supporting those from modest circumstances and helped many students realize their potential to become scientists, doctors, and engineers. For his hard work and brilliance as a scholar and teacher, he received the Sabra S. & Dennis L. Anderson Scholar/Teacher Award. After his retirement from the University of Minnesota, Larry surprised his family with his appointment as Chair of the Physical and Chemistry Department at the University of New England (UNE).

Larry met Frances Dressel at an early age and, after marrying in 1955, they had two daughters who were the apples of his eye. The collaboration with his Brazilian colleagues brought his young family to live in South America for extended periods and is something his daughters fondly remember as the experience of a lifetime. The Brazilian chemists he collaborated with and taught in São Paulo and Recife considered him to be a true education ambassador, and many of these colleagues became lifelong friends. Incidentally (as he would famously say), the Ford Foundation helped sponsor his first visiting professorship and indicated that he would be able to teach in English. When he arrived and discovered that students did not have the expected English skills, he drew on past Latin experience to learn Portuguese in short order so he could successfully deliver his lectures.

After retiring from the University of Minnesota, Larry found great happiness in a second chapter with his devoted wife, Dr. Hongming Wang. Their love grew from a deep friendship built over the course of decades and their shared profession; they had “chemistry.” Larry and Hongming traveled the world together – Brazil many times, Europe, Africa, Asia, Australia – and Larry charmed strangers across continents with his signature meandering stories. Friends and family will remember him as someone who delighted in life’s many serendipitous coincidences, as an exceptionally intelligent person who cared deeply about the world, and as a man of integrity – decent, fair, and good to the core. He had a serious Scandinavian exterior that surrounded both a clever wit and a tender heart. Faculty and students from chemistry departments at the University of Minnesota, the University of New England, in Brazil, and beyond remember a thoughtful colleague and professor who made important contributions to his field.

A natural storyteller and teacher both in and outside of the classroom, Larry regularly challenged those around him to expand their minds. Many undergraduate and graduate students were mentored in his research lab and he was a generous and knowledgeable advisor. His faculty colleagues remember the animated discussions with Larry about the state of education. One of his famous “annoyances” was with modern textbook publishers who claimed that their texts make learning chemistry “easy”. It was Larry’s unyielding assertion that learning is never easy – it requires effort and hard work. A bit of a Renaissance man, Larry found something of interest and wonder everywhere. He pursued many activities such as fly fishing, volleyball, reading mystery novels, and an appreciation for classical music – listening to Beethoven’s symphonies in the chemistry lab and during his final days. Larry also did extensive research on his family history and created an archive to pass along to future generations. Surprisingly, later in life he became quite a clothes enthusiast and enjoyed outfitting Hickey Freeman customers in fine business attire.

Larry was preceded in death by his parents Elizabeth & Bert Lanphere and Lester Thompson, and the mother of his children, Frances Dressel Thompson. Proudly carrying on are his beloved wife Dr. Hongming Wang; daughters and stepdaughter Martha Thompson (Mike Taylor), Whitney (Rich) Crettol, and Jin (Nick) Valaperta; 8 grandchildren; and younger brothers Melvin and Dennis Thompson and their families, and a half sister Connie Egstad. He was a devoted husband and father, and an adoring grandfather whose love and patience knew no bounds. His family cherishes many fond memories and misses him dearly.

Those who choose are welcome to contact Carrie Sutherland at (218) 726-6984, the Development Office Director for the Swenson College of Science and Engineering for additional information.
Read Less

Receive notifications about information and event scheduling for Larry

We encourage you to share your most beloved memories of Larry here, so that the family and other loved ones can always see it. You can upload cherished photographs, or share your favorite stories, and can even comment on those shared by others.

Posted Sep 23, 2020 at 08:20pm
Dear Larry Thompson, we are thinking of you all the time and you will remain in our hearts forever.

3 trees were planted in the memory of Larry Thompson

Posted Oct 08, 2020 at 05:32pm
My deepest condolences and sympathy for his wife and family. I had the privilege to work with Dr Thompson at the UMD during the Summer of 2000. I left the UFPE in Recife for 3 months for my PhD thesis. Dr Thompson was very knowledgable humble and kind human being. I thank him for his hospitality and great opportunity to learn so much from him and collect data for PhD thesis, which he was also part of the Jury. Recently , he wrote me an email telling me he found a picture of me at his daughter’s.
I was a great pleasure to have had the opportunity to meet Dr Thompson at UFPE, Recife
Cristiana Gameiro
Comment Share
Share via:
PW

Posted Oct 08, 2020 at 08:30am
Larry walked into our small Kennebunk bookstore, Mainely Murders, several years ago and almost immediately became more than a customer; he became a treasured friend.
It took no time at all to discover things we shared--and not just our passion for mysteries. Perhaps we first connected as former university teachers. But there was more. For Larry and Paula, it was as natives of the Pacific Northwest; Larry from Washington, Paula from Oregon. Larry was a graduate of Willamette University, located in Paula's hometown, Salem, Oregon. (And, yes, it was at Willamette that Larry became a star pole vaulter!) For Larry and Ann, it was the University of Minnesota; Larry at Duluth and Ann a PHD from University of Minnesota in Minneapolis.
Over the years, Larry shared much about his life--his family, friends, travel, work, play (yes, volleyball). We met Hongming and Martha and other family members. We felt so honored that Hongming and Martha personally invited us to Larry's memorial service, where we learned even more about this amazing man.
We miss you, Larry. But, you'll not be forgotten. Thank you for your friendship.
Paula Keeney/Ann Whetstone

Posted Oct 07, 2020 at 04:58pm
In loving memory of a second father, a fine professor, and an extraordinary man. With love, Dan and Julie (Buch) Cayemberg

Posted Sep 26, 2020 at 02:21pm
Larry was the Department Head of UMD Chemistry when we were hired in the mid-70’s. He was a wonderful colleague until he retired in 2003 and a trusted and dear friend until his passing. His impact as an excellent chemist, caring teacher and research adviser, and an inspired and dedicated department and campus leader was enormous. Because of his remarkable memory and attention to detail, Larry was the historian of the department and a source of information from a huge range of topics. He could recount details of how our chemistry curriculum evolved, what renovation led to the new labs on the fourth floor of the Chemistry Building, how the graduate program in chemistry started, the name of a student in our program from years ago, and any number of university policies and the impact of each one. If we had a dime for every time one of us or a colleague would say “Let’s ask Larry”, we could have retired earlier. Larry had an enormous positive influence on thousands of students, faculty, staff and campus colleagues, as well as the direction of UMD. We will miss him, remember his kind and generous mentorship, and always think of him with a smile and much affection.
We send our deepest condolences to his family,
Bilin Tsai and Don Poe 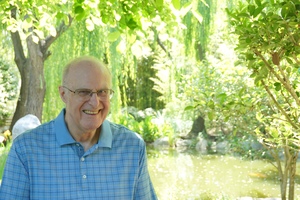 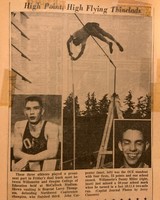 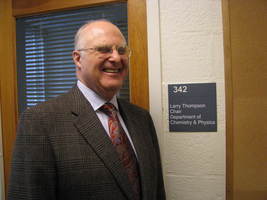 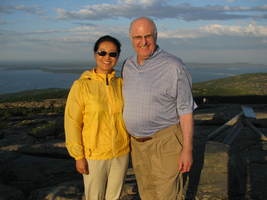