To leave condolences for Michael Moore's online memorial, sign in using one of the following options:

He was the beloved husband of Marlene (Kuchar) Moore of Biddeford, ME for 35 years, father to Melody (Moore) Henriquez and father-in-law to David Henriquez of Boston, MA.

He is predeceased by his mother and father John and Nora (McCarthy) Moore of Lowell, MA, sister Ann Marzec of Dracut, MA and brother James Moore of Nashua, NH.

Michael was a resident of Pelham, NH for 38 years and moved to Biddeford, ME in 2019.

No words can describe how much he will be missed. He left a lasting impression on everyone he met.

The family is especially grateful to Mahesh Bandara, MD and the staff at Southern Maine Health Care.

At the family’s request, donations can be made to the Pulmonary Fibrosis Foundation and the Boys & Girls Club of Greater Lowell.

The funeral service will be private.
Read Less

Receive notifications about information and event scheduling for Michael

We encourage you to share your most beloved memories of Michael here, so that the family and other loved ones can always see it. You can upload cherished photographs, or share your favorite stories, and can even comment on those shared by others.

Posted Sep 07, 2020 at 11:06pm
My condolences for the loss of Michael. My name is Robert McCarthy and I was born in 1935. My father, Michael, was Nora McCarthy Moore's brother and Michael Moore was my cousin. I lost track of family over the years but would love to reconnect with the Moore Family. Please call me at (978) 453-1952.
Comment Share
Share via:
JG


Dear Peggy, The nuns called you Margaret but you were always Peggy to us.
I was so sorry to read about Michael's passing. He was the handsomest one in the city of Lowell. You gave me his picture and it was in my wallet for years. i remember him working at Martins.
He accomplished so much in his lifetime..................i was thrilled to read all he had done. I am sure his family is very proud.

I remember Fletcher Street, 107 Adams Street, and 670 Broadway, St Partick's, May Processions, making the Sacraments..............and last but not least, the Notra Dame Nuns (Ugh!!!!!!!). Then in 1957 they condemned the place and ripped it down and we got to escape.
If it weren't for you and Elaine I probably still wouldn't be able to Jitterbug!!! Remember The Lowell Girl's Club??
I will remember Michael in my prayers. Please express my sympathy to his family.
Gail Fitzgerald Downing

Posted Sep 02, 2020 at 03:40pm
To Mike’s Family - I am so sorry to hear about Mike’s passing. Mike was a great guy and I enjoyed working with him in the Lowell area. May he Rest In Peace. Laurie Leahy
Comment Share
Share via: 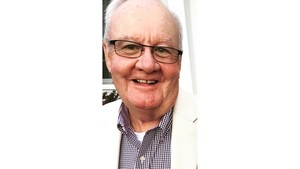