To leave condolences for Patsy Mahoney's online memorial, sign in using one of the following options:

Patsy grew up in Moncton where she was a talented tap dancer. She spent summers with her family in the quiet lobstering villages of Hopewell Cape and later, Murray Corner. Patsy graduated from Horton Academy and then went on to Acadia University in Nova Scotia. At the age of 23, she moved with a friend to Boston and worked at M.I.T. While in Boston, she met Paul Mahoney and they were married on October 30, 1965. They would have celebrated their 55th anniversary later this month.

They settled in Harrisburg and resided there for over 40 years, raising their children. Pasty was a loving mother and wife with a quiet, gentle disposition and a kind heart. She was a talented athlete and avid tennis player. She enjoyed hooking rugs, sewing quilts, needlepointing, gardening, bird watching and collecting antiques.

Visiting hours will be on Thursday, October 15, 2020 from 3:00 p.m. to 6:00 p.m. at Bibber Memorial Chapel, 67 Summer Street, Kennebunk, ME. A Graveside Service will be held on Saturday, October 17, 2020 in Harrisburg, PA. In lieu of flowers, Patsy would be honored by contributions to: The Nativity School of Harrisburg, 2101 North 5th Street, Harrisburg, PA 17110 www.nativityschoolofharrisburg.org where she had tutored children in reading.

To share a memory or leave a message of condolence, please visit Patsy’s Book of Memories Page at www.bibberfuneral.com

Receive notifications about information and event scheduling for Patsy

Donations are being accepted for: The Nativity School of Harrisburg.

We encourage you to share your most beloved memories of Patsy here, so that the family and other loved ones can always see it. You can upload cherished photographs, or share your favorite stories, and can even comment on those shared by others.

Posted Oct 18, 2020 at 10:20am
We enjoyed the times we had together with Patsy, and we are consoled to know that she had a very loving family that will treasure her love and memories.

Posted Oct 16, 2020 at 09:11am
WE remember her:At the rising of the sun and at its going down. At the rustling of the leaves and in the beauty of autumn.AT the blowing of the wind and the chill of winter.AT the opening of the buds and in the rebirth of spring.At the blueness of the skies and the warmth of summer.You will always have a place in my heart. gabi jacob cargiver
Comment Share
Share via:
L

Posted Oct 15, 2020 at 07:53pm
"Love knows no boundaries. While Patsy is no longer physically with us, her spirit is always around us. My deepest condolences."Linda McClellan
Comment Share
Share via:
JB

Posted Oct 15, 2020 at 03:28pm
I am saddened to hear of Patsy’s passing. Patsy was a great friend as we grew up and attended school together. Patsy was always a quiet, gentle and friendly soul. There will be another bright star in the heavens.
I extend my sincerest condolences to Paul and family. God Bless Patsy’s soul and God Bless her family.
John Baxter
New Albany, IN

Posted Oct 15, 2020 at 03:27pm
Dear Paul--I wanted to reach out to you and your children and let you know I am thinking of you during this difficult time---My deepest sympathy goes your way best Carl Nordblom
Comment Share
Share via: 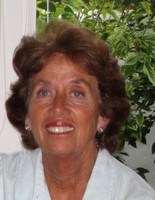