To leave condolences for Peter Cooke's online memorial, sign in using one of the following options:

He was born in Quincy, MA on December 22, 1943, the son of ... Read More
Peter Joseph Cooke III, 75, of Kennebunk, formerly of Massachusetts, died Sunday December 15, 2019 at Gosnell Memorial Hospice House in Scarborough following a lengthy illness.

He was born in Quincy, MA on December 22, 1943, the son of Peter J. and Harriet (Dodd) Cooke II, attended North Quincy schools and graduated from Boston College, Class of 1965.

Peter resided on Cape Cod for 30 years before moving to Maine in 2004, opening his accounting practice in Kennebunk, in which he practiced for 12 years before his retirement.

He loved the sport of hockey, earning a full scholarship to Boston College. He enjoyed coaching his son’s hockey teams, as well as playing in many adult leagues. His life goals were simply to be a good husband and father.

Services will be private, with interment in St. Joseph’s Cemetery, Taunton, MA.

To share a memory or leave a message of condolence, please visit Peter’s Book of Memories Page at www.bibberfuneral.com.
Memorial Donations can be made to Southern Maine Hospice, 180 US-1, Scarborough, ME 04074, in Peter’s name.

Receive notifications about information and event scheduling for Peter

You will receive any future notification messages.
Print
Services are private.

Donations are being accepted for: Hospice of Southern Maine .

We encourage you to share your most beloved memories of Peter here, so that the family and other loved ones can always see it. You can upload cherished photographs, or share your favorite stories, and can even comment on those shared by others.

Posted Jan 20, 2020 at 11:00am
Peter was my best friend at North Quincy High School.......I came home from college to serve as his Best Man in 1961. I’m sitting in my home in Naples. FL and Peter came to mind.....googled him and learned of his recent passing. Although we were great pals in H.S. Life took us on very different paths and we lost touch for 50 years. As time goes by we have more time to think about friendships that slipped away and I would often think of Peter and the friendship we enjoyed so many years ago. I now wish I’d called him in recent years to re-kindle the friendship......may God bless you my great friend. Cough
Comment Share
Share via:
LC

Peter spoke of you often, Paul. Thank you for your message of friendship. Linda
JB

Posted Dec 26, 2019 at 08:20am
Dear Linda,
My deepest sympathy to you and your family on the loss of Peter.
You both were wonderful neighbors for the 4 years that I lived next to you.
I fondly remember Peter as a gentle and kind man who always had a smile
and a friendly wave to those he saw.
He will be greatly missed by all who knew him but mostly by his loving wife, children and grandchildren.
Take care during this painful time.
Janet

Thank you for your message Janet. Peter was a very gentle and kind man. I do miss him dearly but am so grateful for his love.
CW

John Kotsonis (We don't text at all)

Posted Dec 17, 2019 at 09:24pm
Peter was one of those great customers I had the pleasure to know at the Kennebunk Post Office. Always had time for a quick chat and a smile. A warm and generous man. My very best to Linda and family. Blessed to have known him.
Comment Share
Share via:
LC

Thank you for your message John. Peter enjoyed his daily visits with you during his busy time of year! 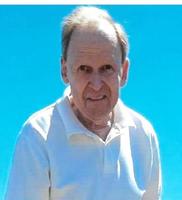