To leave condolences for Richard Desmarais's online memorial, sign in using one of the following options:

Provide comfort for the family of Richard Desmarais with a meaningful gesture of sympathy.

Considered to easily be one of the best football players and all-around athletes to have ever come from the state, Dick’s strength and exceptional speed was incomparable to all opponents who faced him. He excelled and shattered records in every sport he played including baseball, basketball and track as a Sanford undergraduate. He went on to become a multifaceted, shining standout at Boston University, playing for the Terriers. In 1961 Dick turned pro choosing to play for the Ottawa Rough Riders in the Canadian Football League after getting several offers from national CFL and NFL ball clubs including the Boston Patriots and NY Giants. His phenomenal gameplay had earned him the starting running back position for the Rough Riders, beating out fan favorite Joe Kelly who had helped the team earn the Grey Cup the year before. When Dick was introduced in the first game, he was soundly booed by the Ottawa fans, but the boos soon turned to cheers after a few short weeks when his caliber of play showed the fans that he was worthy of the coaches decision and was named Rough Rider Rookie Of The Year. In 2008 he was inducted into the Maine Sports Hall Of Fame.

Dick had worked summers as an Ogunquit Lifeguard prior to his CFL career and enjoyed his life, family and work to the fullest, eventually becoming a top national salesman for the Nokia Corporation. Because of his easy going, strong character, Dick was loved by friends, family and fans in numbers too lengthy to list and will certainly be a hard loss to many.

He was the son of proud parents, Paul and Albertine Desmarais of Sanford, Me. He was predeceased by his beautiful wife Linda Desmarais in 2004 after raising their own family in Andover, Ma and having moved to Ogunquit with her, and then shorty after by his daughter, Lisa Desmarais. He had also very recently lost both brothers, Roger Desmarais of Sanford Me., Raymond Desmarais of Biddeford Me., and long-time friend, "Woody” Haselton of Vero Beach, Fl. All being very close to him. He had also always deeply felt the loss of his sisters, Vivian Masse and Rachel Gelinas-Hotham many years ago. He is survived by his son and daughter in law, David and Tina Desmarais of Ogunquit, Me. and son Richard R. Desmarais Jr. of Houston TX. Dick regretfully leaves his beloved large extended family and many friends, including his dear sister Doris Lavoie who he otherwise wants to know he loves one and all and promises to meet each again to embrace.

The family would like to extend their deepest appreciation to not only every single health care professional involved in his care but especially to the York Hospital Hospice program nurses and aides who cared so well for our hero in his struggle which helped fill his final days with comfort and happiness. We would like to also express our heartfelt love to caregiver Rachel Angis of Sanford Me. who went above and beyond duty giving him such good care as well, taking him for enjoyable rides to see the ocean almost daily.

At this time, it is planned that private services will be held late spring.
Read Less

We encourage you to share your most beloved memories of Richard here, so that the family and other loved ones can always see it. You can upload cherished photographs, or share your favorite stories, and can even comment on those shared by others.

Posted Feb 12, 2020 at 04:02pm
Dear Rick and David,
We are sorry to learn of Uncle Dick's passing. He was a kind and gracious man to Brian, our three children and I.

Posted Feb 10, 2020 at 09:26am
It was 1954/55 when the Boston Celtics came to Sanford High School to play our guys. Dick was on the varsity basketball team at the time. On a layup shot, Dick was being guarded by none other than Bob Cousey. Both went in the air at the same time, but only Bob came down. Dick performed this particular move that suspended him in the air (visualize a gymnast doing an “L” seat on the rings) and successfully made the shot. Cousey has this surprised look on his face and just laughed out loud. It was a great moment! We cheerleaders were sitting on the sidelines cheering and close to the action. I’ll never forget it. Linda Farrell Britt
Comment Share
Share via:
PB

Posted Feb 06, 2020 at 02:47pm
My deepest condolences to all your family on the loss of your Dick. Growing up, he was a dear friend of my dad and I remember Dick, Linda, David, Rick & Lisa so fondly from my childhood. My heart is with you all at this sad time and I send great love to you all. Deepest sympathies, Cinda
Comment Share
Share via: 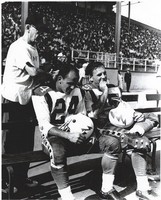 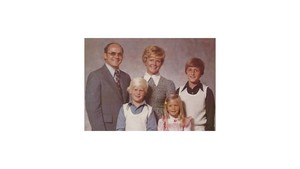