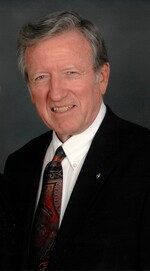 Robert L. “Bob” Card, 86, of Cape Porpoise, Maine, passed away peacefully with his family by his side on March 1, 2021. Born on December 5, 1934, in Medford, Massachusetts, to Philip W. and Esther B. Card, Bob was a proud graduate of Arlington High School, where he represented the very best of the school’s ethos. He was elected president of the student council and known as a popular leader and example to his classmates. Bob also became an enthusiastic trumpet player in his teenage years, a passion he was to follow for the rest of his life. He went on to matriculate at Princeton University, majoring in biology. A member of The Tower Club, he became an even prouder member of the Princeton University Band. After graduating from Princeton in 1956, he attended the University of Michigan Dental School and obtained his DDS in 1960. Bob went on to join a dental practice with his father, Philip W. Card, West Somerville Dental Associates, which pioneered the practice of operative dentistry on an outpatient basis. His first wife, Barbara Schulz Card, passed away in 1969.

Bob moved from his Somerville practice in 1985, and established Kennebunk Family Dental Care in Maine with Wes Mills in 1986, and retiring in 2000. In 2013, Bob helped establish The College of Dental Medicine at The University of New England. The only dental school in northern New England, the college has graduated over 448 students since its founding.

To everyone who knew him, Bob was a vibrant community leader who greeted friends, family, and strangers alike with a warm smile and a funny story. He served his beloved communities of Kennebunk and Kennebunkport with music, leadership, and laughter. Bob was a long time member of South Congregational Church of Kennebunkport, taking on the role of church historian and singing in the choir until the coronavirus hit in 2020. He was also a strong supporter of The Brick Store Museum, serving as president of its board in the 1997-1998. Bob was also president of the Kennebunk Rotary Club from 2002-2003, and president of The Kennebunkport Historical Society. His interview of President George Herbert Walker Bush is in the archives of The Historical Society.

His family will receive friends Friday, March 5, from 4-6 PM at the Bibber Memorial Chapel, 67 Summer St., Kennebunk. Private funeral services will be held Saturday at the South Congregational Church in Kennebunkport. Burial will be in Mt. Auburn Cemetery, Cambridge, Mass.

Bob’s funeral service will be live streamed on Saturday starting at 2 PM. If you would like to virtually attend the funeral service via Zoom, please click this link: https://zoom.us/j/95440472643

Contributions may be made in his memory to the South Congregational Church 2 North Street, P.O Box 414, Kennebunkport, ME 04046 or to the Card Family Fund for Cancer Related Research, Princeton University, Dept. of Molecular Biology, PO Box 5357, Princeton, NJ 08543.

Arrangements are in the care of Bibber Memorial Chapel, 67 Summer St. Kennebunk, ME.