To leave condolences for Shirley Kessler's online memorial, sign in using one of the following options:

Print
Shirley Kessler, an inspiration who lived her life as the embodiment of kindness and empathy, passed away in Kennebunk, Maine on August 15, 2020.

A passionate educator, wife, mother, and friend, Shirley was a prominent member of the Bloc... Read More
Shirley Kessler, an inspiration who lived her life as the embodiment of kindness and empathy, passed away in Kennebunk, Maine on August 15, 2020.

A passionate educator, wife, mother, and friend, Shirley was a prominent member of the Block Island, RI community, and also of the Sons and Daughters of Ruth congregation there. Shirley was an extraordinary woman who served as a school administrator in mainland Rhode Island.

Born in Providence, Rhode Island to Samuel I. and Minnie (Horowitz) Bassing, Shirley graduated from Hope High School, then earned her BA at Rhode Island College, her MA from Boston University, and EdD from Walden University.

Shirley began her career as an educator as a first grade teacher in Attleboro, Massachusetts, but after earning her Master’s Degree she began teaching at Rhode Island College, where she developed a wholistic approach to evaluating children, a program which was a precursor to many of today’s methods of assessing students who may need some form(s) of special education support.

From there Shirley moved to the East Providence, RI school district, where she was an administrator who oversaw and supervised the district’s reading curriculum and programming while simultaneously serving at various times as adjunct professor of education at Salve Regina, Providence, and Rhode Island Colleges.

Shirley had a lifelong affinity for Block Island, where she was first brought as an infant to visit a home owned by her Aunt Julia and Uncle Joe Marcus. Some years later she introduced her future husband, Sanford, to the island, and by the middle of the 20th century the two of them were spending their summers there. In the 1970s they bought the building that had previously housed the Primitive Methodist Church, and when they retired in 1990 moved there permanently. Shirley was an extraordinarily involved citizen of the Block Island community who served on the school committee and tourism council for many years. She also began the “Friends of the Library” and regularly volunteered at the annual “Roll Call Dinner” at Block Island’s Harbor Church.

Shirley’s husband Sanford B. Kessler, to whom she was happily married for 52 years, predeceased her in 2000. She is survived by two children, both of whom she treasured, and who cherished her: her daughter Fran Kessler of Kennebunk, Maine and her son Samuel and his wife Evelyn, of Haymarket, Virginia. She is also survived by her cousin, Joyce Aaron, of Orleans, Massachusetts.

There will be a graveside service in the Spring of 2021 on Block Island.

Receive notifications about information and event scheduling for Shirley

We encourage you to share your most beloved memories of Shirley here, so that the family and other loved ones can always see it. You can upload cherished photographs, or share your favorite stories, and can even comment on those shared by others.

Plant a Tree in Memory of Shirley
Plant a tree 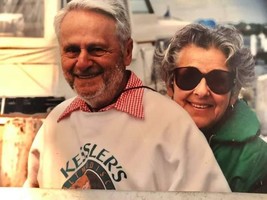