To leave condolences for Alan Friot's online memorial, sign in using one of the following options:

Born in Malden on October 16, 1932, Alan (also known as Grandpa Alan to his family, friends and fans) Friot died from an aggressive form of colon cancer. He did not suffe... Read More
Alan Holden Friot

Born in Malden on October 16, 1932, Alan (also known as Grandpa Alan to his family, friends and fans) Friot died from an aggressive form of colon cancer. He did not suffer long. He passed away at home in Wells with family by his side.

Born in Malden, Massachusetts, Alan grew up there surrounded by his mother, sister, grandparents, cousins and extended siblings from his father’s previous and subsequent marriages. Alan loved being with all his cousins and siblings.

After graduation from both Malden High, in 1950, and a year at Chauncey Hall, in 1951, he went on to study electrical engineering at MIT, earning a bachelor’s degree in 1955. Alan went straight to work for the Central Intelligence Agency, 1955 – 1959, in a group called Technical Services.

Alan married his high school sweetheart, Helen L. Reid, in 1956. They moved to Washington, DC, to both work at the CIA. It was a sweet time in their life with friends and their very secret work. The birth of their son Paul in 1958 brought them back to the Boston area, settling in Winchester, MA, where they went on to have 2 more children, Christopher and Suzanne. The family eventually moved to Harvard and then Groton, Massachusetts.

Alan’s career took many turns, including building simulator cockpits for Boeing 747s. A layoff in the early 70s led him to get involved with water treatment. He subsequently bought a water treatment business in 1971, which he worked in with his son Paul for over 45 years, retiring in December 2019.

Alan was a philosopher, poet and a great thinker about the planets. He wrote over 2000 poems and self-published a book, “Grandpa Alan’s Teddy Bear Poems”. This achievement touched more lives than we can count. Those who would stop and spend a moment or two with Alan would be exposed to his discovery about the tip of the earth and many more aspects to our solar system. It was an uphill battle for anyone in the academic world to see his perspective, but he continued to pursue an in-depth dialogue up until his death.
This was a big life lived by a man who loved performing in local musicals with his son Paul, playing bridge with his wife Helen or cribbage with any one of his children and grandchildren. He gave everyone he met something to think about!

Alan is predeceased by his wife, Helen in 2018, and survived by his children: Paul and his wife Pattie of Port St Lucie (FL), Christopher and his wife Janet of Groton (MA), and Suzanne L.F. Gagnon of Portland (ME). Alan was very proud of his grandchildren: Christopher A. Friot II and his wife Irie of East Boston, Jillian A. Friot of Memphis, TN, and Cooper J. Gagnon of Kennebunkport. Alan was also a loving Uncle to many nieces and nephews.

In lieu of flowers donations can be made to Southern Maine Health Care of Biddeford, ME. https://smhc.thankyou4caring.org/

Services will be private
Read Less

Receive notifications about information and event scheduling for Alan

Donations are being accepted for: Southern Maine Health Care.

We encourage you to share your most beloved memories of Alan here, so that the family and other loved ones can always see it. You can upload cherished photographs, or share your favorite stories, and can even comment on those shared by others.

My wife and I extend our deepest sympathies to all of you. I met Alan almost forty years ago when he and Paul installed a water treatment system in our home. I always enjoyed talking with Alan about a myriad of things when I went to his shop. I will very much miss these encounters. He was a nice man, always with a smile and a great sense of humor.
Alex & Lynda of Groton
Comment Share
Share via:
V

Posted Jul 24, 2020 at 11:52am
Alan was always a smiling face I looked forward to seeing just about every night, sharply at 5pm at the Bull N Claw in Wells. He will always have a very special place in my heart. My son will always treasure his (autographed copy) of his teddy bear book. My condolences to the entire family and know that Alan touched the lives of so many people and was admired deeply! Thinking of you all.
Comment Share
Share via:
MD

Posted Jul 24, 2020 at 09:06am
Suzanne, my heart goes out to you during this very sad time in your life. I never met your dad, but I know he was an extraordinary person and you were so lucky to have him in your life for so long. I hope you find some comfort in the wonderful memories of him and in knowing that he made this world a much better place! My deepest sympathy to you and your family. Love, Mary
Comment Share
Share via:
AF

Posted Jul 24, 2020 at 09:04am
Our loved ones leave this world, but never our hearts. With our heartfelt sympathy.

Posted Jul 24, 2020 at 08:52am
My father worked for Alan at Baird Atomic many years ago. He and Helen became friends of my parents, Morry & Anita Ginsberg. I had met Alan many years ago as well. He and Helen were invited to a cookout at my house when my parents were visiting from Florida. Only Alan could memorize the directions I gave him to get there. It was a pleasure to have Alan & Helen at my parents 50th wedding anniversary. He wrote a beautiful poem for them which he read aloud at the party. What a beautiful memory. My mother now lives in an Assisted Living facility in Danvers, and Alan would call her almost weekly to chat with her. He would even sing to her, and she would call me so excited about it. He also would call me to chat, and I looked forward to it. My mother and I are blessed to have known Alan, and he will always be in our hearts.
Comment Share
Share via: 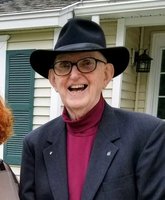