To leave condolences for Anne Allaire's online memorial, sign in using one of the following options:

Provide comfort for the family of Anne Allaire with a meaningful gesture of sympathy.

Print
KENNEBUNK – Anne Marie Allaire, known professionally as Anne Gable Allaire at agafineart.com, passed away peacefully Wednesday, April 1, 2020 at Maine Medical Center. Her husband, William “Bill” Allaire and daughter, Katharine “Katie” Serem... Read More
KENNEBUNK – Anne Marie Allaire, known professionally as Anne Gable Allaire at agafineart.com, passed away peacefully Wednesday, April 1, 2020 at Maine Medical Center. Her husband, William “Bill” Allaire and daughter, Katharine “Katie” Seremeth had been by her side comforting her for hours before she passed at 6:13 p.m.
Anne was born in St. Louis, Mo. May 20, 1945. She was the precious daughter and first child of Marie Peterson Rosene Tudor and Benjamin Melvin Tudor. They moved to Des Moines, Iowa soon after her birth and before the birth of their second child, Anne’s brother, Thomas Tudor.
Anne grew up in Des Moines and attended Theodore Roosevelt High School, graduated in 1963 and entered Drake University that Fall. She transferred to the University of Nebraska to earn a degree in fine art, painting and interior design. She then made a handsome living working for architectural firms as an interior designer in Minneapolis/St. Paul and then in Detroit where she lived with her first husband, John Gable.
Anne married her present husband, Bill, Dec. 30, 1995 at Kennebunkport’s South Congregational Church and were married by Reverend Charles Whiston. Bill had met Anne after her divorce became final in 1989 and she had left her original home in Kennebunkport and purchased a home in Kennebunk. One year later Bill moved in with her, Tom, Christopher, Katie, four cats and a dog named Powell.
She loved and dedicated herself to her three children: Tom, Chris, and Katie. She always kept their needs above hers. Anne’s biggest life challenge was a disease of the blood, Amyloidosis, which attacked her heart and required that she have a heart transplant. She received her new heart Oct. 16, 1997 at the Mayo Clinic in Rochester, Minn. She was given a stem cell transplant Oct. 9, 1998 at BU Medical Center in Boston to erase 98 percent of the disease. She was then able to return home and continue feeding her soul and body with her love of painting. She became a Master Pastelist in 2006, a level of skill awarded to only a couple hundred out of thousands of members. Anne was a dedicated artist and loved spending time sitting, meditating and, especially, painting at the Franciscan Monastery near Kennebunk Beach. She was also a dedicated member of the Pastel Society of Maine, a Master Pastelist in the Pastel Society of America, and the Art Guild of the Kennebunks. Anne’s mother, Marie, father, Melvin and stepdad, Lesley Rosene predeceased her.
She is survived by her husband of 25 years, Bill Allaire; a brother, Thomas Tudor and his wife, BAnn who live in Colorado Springs, Colo. They have two daughters, Sarah and Abby. Abby is a professional at Northern Arizona University and Sarah is married and lives in Phoenix with her husband, Scott and their very young daughter, Charli. Anne’s oldest child is Thomas Gable who lives in Jacksonville, Fla. with his wife, Lisa and their two children, Lindsay (11) and Christopher (9). Anne’s second son, Christopher lives in Kennebunkport with his wife, Jaime and three children, Taylor (19) who is on her own, daughter, Kierney (13) and son, Keaton (9). Her third child daughter, Katharine Seremeth, is living in North Yarmouth with her husband, Joseph and their two young boys, Wilder (4) and Maddy (2).
A celebration of Anne’s life will be held at a later date. To share a memory or leave a message of condolence, please visit Anne’s Book of Memories Page at www.bibberfuneral.com Arrangements are in care of Bibber Memorial Chapel, 67 Summer Street, Kennebunk, Maine. www.bibbermemorial.com
Anne loved animals and any contributions on her behalf would be appropriate in her name to Safe Haven for Cats in Wells at www.safehavenhumanesociety.org, or Animal Welfare Society in West Kennebunk, Maine at www.animalwelfaresociety.org.
Read Less

Receive notifications about information and event scheduling for Anne

Print
A celebration of Anne's life will be held at a later date.

Posted Apr 18, 2020 at 02:10pm
Anne Allaire was a loyal member of our Life Enrichment group for 23 years. She led a life enriched by her disciplined creation of wonderful landscape paintings and pastels, despite her health challenges. She was spiritually inspired by this work in her studio as well as her meditation practice and love of her husband Bill and her children.
We are grateful she shared her wisdom with us for all these years,
Mary Lee and Win Fowler
Mary Lee and Win Fowler
Comment Share
Share via:
RB

Posted Apr 16, 2020 at 10:09am
I am sad to hear of Anne's passing, and my heart goes out to her husband, Bill, and all her family. I first got to know Anne through her art, and her friendship with my late partner Sandy Armentrout. Over several years, we acquired several of Anne's pastels, and purchased a gicleé print of "Sanctuary," a pastel, probably pleine aire, of a path in her beloved spot at the Franciscan monastery. I will also cherish a small pastel gift that Anne gave me of an old shed, surrounded by rugosa roses in bloom, that formerly stood next to my home in Stonington. That gift was a thank you for having given Anne and Bill a several day stay in Stonington to paint, relax and enjoy being alive at a time after her long journey through heart transplant and stem cell transplant, and all the anxiety that Bill endured as he stood at her side and held her hand through that multi-year ordeal. Rest in Peace, Anne.
Comment Share
Share via:
JH

Posted Apr 12, 2020 at 03:06pm
Many condolences to Bill & Anne's whole family. She will be missed very much in our neighborhood & by so very many people. She was a wonderful person & welcoming to us being new on Oak Bluff Road. - John Stubbs, Jen Hass & our boys, Nate & Liam
Comment Share
Share via:
EW

Posted Apr 07, 2020 at 02:30pm
I shall miss Anne... just about the kindest person I have ever had the good fortune to know. Her resilience in the face of illness inspired her friends and all who knew her.
She focussed her caring ways on those around her always asking how others were in spite of our own concerns for her!
Lovely inside and out, kind and caring, always with a sense of humor about the trials and tribulations of life, she was so special.
In her art she had a talent for capturing how light shone upon her subject. It is no surprise that her light shone brightly into the lives she touched.
My condolences to Anne's family.
Eileen Willard
Comment Share
Share via:
JF

Posted Apr 06, 2020 at 01:04pm
We knew Anne just long enough for a couple of dinner/movie nights with her and Bill and for her to launch me into the world of art as a "colorful" enterprise (before Anne I worked only in B&W). Paulette and I have the fondest of memories of Anne and send our heartfelt condolences to Bill and the children. Paulette remembers Tom, especially, whom she remembers as a very special student, serving as guidance counselor at the Middle School. (John and Paulette Forssen)
Comment Share
Share via: 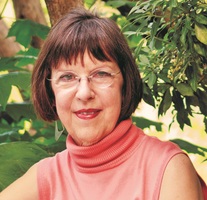