To leave condolences for Catherine Fitzgerald's online memorial, sign in using one of the following options:

Print
Catherine F. Fitzgerald died peacefully on June 14, 2020. Catherine was a strong and independent woman and her quiet demeanor always made her a good listener.

Born in Belmar, New Jersey, on December 2, 1918, she was the eldest daughter ... Read More
Catherine F. Fitzgerald died peacefully on June 14, 2020. Catherine was a strong and independent woman and her quiet demeanor always made her a good listener.

Born in Belmar, New Jersey, on December 2, 1918, she was the eldest daughter of Ethel E. Reichey (Armes) and Charles W. Reichey. Her childhood was spent among her extended family in Belmar. A teenager during the Great Depression, Catherine and her beloved sister Dorothy recounted digging for clams when food was scarce, triggering a lifelong aversion to shellfish, and a commitment to both frugality and generosity toward those in need.

Catherine graduated from St. Rose High School, Belmar and attended secretarial school. While working as a legal secretary in Asbury Park in 1940, she received a letter from her friend Dee’s brother, Paul Fitzgerald while on a naval assignment in Hawaii. After a romance by mail, telegrams, a phone proposal, and in the midst of WWII, they married when his ship docked at the Brooklyn Navy Yard before Paul deployed to the North Atlantic for the duration of the war. Catherine and their growing family would follow Paul’s post-war career around NJ, Newport, RI, Port Lyautey (now Kenitra), Morocco, finally settling in Shrewsbury NJ, where she lived for more than 60 years. Catherine was a regular communicant at St. James Church in Red Bank, NJ and found solace praying the Rosary her entire life.

As her children grew older, Catherine resumed a career with a regional bank, ultimately retiring from Wells Fargo. Retirement afforded her the opportunity to pursue her love of knitting and reading, until she spotted a Help Wanted sign at the Fort Monmouth Library. There she began her next career retiring at age 90 after two decades of service. Her colleagues at the library provided her great support upon her beloved Paul’s death in 1993, after more than a half-century of marriage. In recent years, she split her time between Kennebunkport, Maine and NJ, before moving to Maine in 2018.

Catherine is also predeceased by her parents and sister Dorothy, daughter-in-law Mildred Fitzgerald, and all her sisters and brothers–in-law. She will be deeply missed by her children and their spouses, David and Linda Fitzgerald (Winter Springs, FL), Stephanie and Steven Singer (Santa Cruz, CA), Mark and Virginia Fitzgerald (Hilton Head, SC), Geralyn Fitzgerald and Paul Hogan (Kennebunkport, ME), Janine Fitzgerald and Fred Horn (Louisville, CO) her grandchildren and great grandchildren, as well as many nieces, nephews and cousins.

A Memorial Mass will be held at St. Martha’s Church, 30 Portland Rd., Kennebunk, ME at 11am on Friday, June 19, 2020. For a woman born during the Spanish flu epidemic, we are sad to confine her service to Maine residents adhering to the state CDC and diocesan protocols. A service open to all will be planned when it is possible. This season we are blessed by abundant flowers, so please consider a donation to help our neighbors experiencing food insecurity in New Jersey (Community Food Bank of New Jersey) Maine (Community Outreach Services) or your local community.
Read Less

Receive notifications about information and event scheduling for Catherine

We encourage you to share your most beloved memories of Catherine here, so that the family and other loved ones can always see it. You can upload cherished photographs, or share your favorite stories, and can even comment on those shared by others.

Plant a Tree in Memory of Catherine
Plant a tree 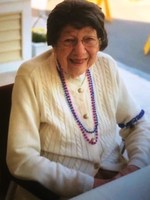