To leave condolences for Daniel Rush's online memorial, sign in using one of the following options:

Receive notifications about information and event scheduling for Daniel

We encourage you to share your most beloved memories of Daniel here, so that the family and other loved ones can always see it. You can upload cherished photographs, or share your favorite stories, and can even comment on those shared by others.

Posted Nov 23, 2020 at 01:12pm
I knew Dan as a colleague when I practiced law in Bangor back in the 1980's. Eventually, we both migrated to York County and our acquaintance was renewed. I became Dan's client when my husband and I needed real estate work done several years ago. I will remember Dan's quiet competence and common sense, his devotion to his family, and his understated sense of humor. He was a very good lawyer and a very nice guy. I was shocked and so very sad to hear of Dan's passing. I send my deepest sympathies to Diana and the rest of Dan's family and friends who have lost him so suddenly and much too soon.
Claire Julian
Comment Share
Share via:
AD

Posted Nov 21, 2020 at 03:38pm
Dear Diana and "girls",
I was so sad when I saw this in the paper.I can't imagine what you all must be going thru right now.
Dan was always so kind , gentle and funny.Sometimes when he stayed late at the office and I was still cleaning he would call me in to show me a picture of an old car or tractor, and we'ld chat about that like the guys on "car talk".He was always interested in some of the history I would share about my mom's place in Damariscotta,or our family civil war history.He was so genuinly nice to me, as you were too Diana.
Cleaning your home for all those years gave me the chance to see how loving your whole family was, and how much you all cared for and respected eachother. Thankyou for always making me feel welcome.
Again, I can only hope that time will help you thru this,and you all have eachother to lean on and cherish the memories that you have.
I know he was very proud of you all.
Love and prayers,
Anne Dolinsky

Posted Nov 21, 2020 at 10:57am
Diana and family, I am so sad to learn of Dan’s passing. I was blessed with the benefit of Dan’s patience and kindness. His gracious, generous heart will be sorely missed. I am heartbroken for your loss but thank you for sharing your husband and father with our community. His mark on the world and those in it made it a better place.
Comment Share
Share via:
SI

Diana, I am so sorry to hear of Dan's passing. Know that my thoughts are with you and your family. Take care.
Comment Share
Share via:
WM

Posted Nov 17, 2020 at 04:00pm
Our deepest sympathies to Diana and all Dan's family and friends - such a shock. Most of my experiences with Dan were, of course, working opposite him on behalf of our legal clients. Dan was a consummate professional and one of the "good" lawyers - respectful and firm, yet willing to hear the other side. It's the way law should be practiced. I will miss working with him. I also got to know Dan a bit outside of work - hearing stories about his kids, about his early life up north. He had a wit that I enjoyed and a pretty good memory for people. I had moved away from Maine - had been gone about ten years. One day I was walking along a street in Washington, DC, and who popped up out of the subway with a mass of tourists two blocks from the White House and almost bumped into me, but Dan! It was as if we were just catching up at a bar association meeting, not a completely chance meeting in a city 500 miles and ten years removed from our last conversation. Dan was an easy guy to like - I'll miss him as I know a lot of his colleagues in law will, too.
Comment Share
Share via: 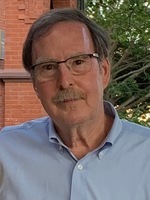