To leave condolences for Douglas Poole's online memorial, sign in using one of the following options:

Provide comfort for the family of Douglas Poole with a meaningful gesture of sympathy.

Following graduation, he became an Insurance Agent with The Boston Insurance Company (from 1958 to 1960), then became a Partner at Storer, Damon and Lund (from 1960 to 1995). He started his own company, Poole Professional Ltd., with his son Christopher, which he operated between 1995 and 2005.

Doug was a Trustee at the Boston Museum of Science, and a member of the Cambridge Association of Insurance Agents, Cambridge Kiwanis Club, Reading Youth Hockey Association, Reading Jaycee’s, Reading Scholarship Foundation, Meadowbrook Golf Club, Hobe Sound Golf Club, Webhannet Golf Club, and Cape Arundel Golf Club. Doug volunteered regularly at his church in Maine and in Florida and was generous with his time and knowledge. The numerous charities that Doug supported over the years are a testament to his generosity and kind heart.

As one might imagine, he was an avid golfer, and also enjoyed traveling and spending quality time with his grandchildren. Doug believed that education and travel were two of the most important opportunities afforded to him and he shared them with his family. His passion and love for animals brought him to Africa on three separate occasions to see the beauty of nature and majesty of the African continent. Doug and Martha spent many happy years in Bermuda, with trips too numerous to count. They also traveled to Mexico each year to the Mayan Riviera and would often be found swimming in any ocean that was warm enough!

A second Memorial Service will be held at South Congregational Church, 2 North Street, Kennebunkport, ME, details to follow. Those wishing to remember Doug may do so through donations to The Animal Welfare Society of Kennebunk or St. Jude Children’s Research Hospital.
Read Less

Receive notifications about information and event scheduling for Douglas

We encourage you to share your most beloved memories of Douglas here, so that the family and other loved ones can always see it. You can upload cherished photographs, or share your favorite stories, and can even comment on those shared by others.

Posted Jan 27, 2020 at 07:25pm
What a wonderful man he was! He was kind, thoughtful, a real family man and always a gentleman. Our deepest sympathies to Martha and his beautiful family.
Comment Share
Share via:
PB

Posted Jan 25, 2020 at 09:53am
We were so sad to hear of Doug’s passing! My last memory is when we stopped as a group at Hobe Sound Golf Club to sing Christmas carols...Martha had us come in....Doug was sitting in his chair and sang the whole Christmas Carol with us! Doug was a wonderful man and will be missed...Rest in Peace my friend. Prayers to you and your family Martha.
Penny and Ron Blanchard
Comment Share
Share via:
BD

Posted Jan 24, 2020 at 04:34pm
Dear Martha,
I was sorry to hear of Doug’s passing. I’m so glad that I got to reconnect with both of you in Hobe Sound last year. I was remembering the many wonderful times we shared at Meadowbrook and the infamous “What a guy, what a girl” golf tournaments. I know your many memories and the love and support of your family will strengthen you at this most difficult time. I will remember all of you in my prayers.
Love,
Brenda Doherty
Comment Share
Share via:
WT

Posted Jan 24, 2020 at 02:35pm
Hi Chris,
Sorry to hear about your Dad's passing. My condolences to you and your whole extended family. But your your continuing professionalism in serving the professional services industry is an excellent and ongoing legacy for you and your father.
Always my best,
Bill Turville, still a practicing architect! (BTW, i did not know our mutual connection to York County, specifically, Alfred, where my family lived for 15 years, and my sister still lives nearby in Hollis Center.)
Comment Share
Share via: 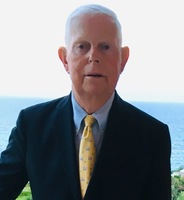