To leave condolences for Elisha Camp's online memorial, sign in using one of the following options:

Provide comfort for the family of Elisha Camp with a meaningful gesture of sympathy.

Should friends desire memorial contributions may be made to the Animal Welfare Society at PO Box 43, West Kennebunk, ME. 04094.

To share a memory or leave a message of condolence, please visit Ted’s Book of Memories Page at www.bibberfuneral.com.

Donations are being accepted for: Animal Welfare Society.

We encourage you to share your most beloved memories of Elisha here, so that the family and other loved ones can always see it. You can upload cherished photographs, or share your favorite stories, and can even comment on those shared by others.

Posted Oct 28, 2019 at 01:26pm
Ted was someone you wouldn't forget once you met him. He was a good neighbor and friend on Sanibel Island and we truly enjoyed the good times we had together both in Florida and in Maine. And we will never forget the formal burial of one of his turtles. Joyce and family have been and are a delight in our lives. Our love and deepest sympathy, Paul & Boyd
Comment Share
Share via:
NM

Posted Oct 26, 2019 at 12:12pm
Joyce and Family, I was sad to hear of Ted’s passing. We lost Bill 4 years ago pretty suddenly too. Lots of good memories of Treasure Island. Prayers and Hugs.
Judy Frappier
Comment Share
Share via:
AB

Posted Oct 25, 2019 at 10:03am
The Kennebunkport Historical Society mourns the passing of Elisha "Ted" Edward Camp, Sr., father-in-law of the Society's Executive Director, Mrs. Kirsten Camp, and extends heartfelt sympathy to Kirsten, Mrs. Camp's husband, Ira, Ted's son, and to Ted's granddaughter and grandson, Gillian and William Camp. A member of the Society, Ted and his beloved wife, Joyce, supported the Society over the years, not only by their generous contributions, but also by their joyful presence at Kennebunkport Historical Society events. Ted had a big smile that radiated like a sunburst when he entered a room. The laughter and good cheer that Ted brought with him to Society gatherings reminds us all of the most lasting legacy any of us can leave behind: the memory of a big heart, an enthusiastic relish for every moment of a live well lived, and the ever constant love of family and friends. Ted's legacy is all of these. It is sad we shall not see him again, but we remember him with warmth and affection for his good character and the indelible image of a husband, father, father-in-law, and grandfather brimming with infinite pride in those he loved. "Be of good courage, and He shall strengthen your heart, all ye that hope in the Lord." --Psalm 31, verse 24. Board of Directors, The Kennebunkport Historical Society
Comment Share
Share via: 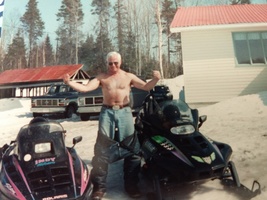 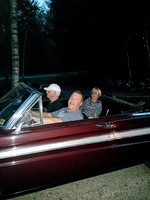