To leave condolences for Francis McAuliffe's online memorial, sign in using one of the following options:

Gerry graduated from Malden High School and attended Boston College. He entered the U.S. Air Force in 1954 and served his country for 20 years. Gerry was KC-135 tanker pilot and flew missions in the Vietnam War. Upon his retirement from the Air Force, he enrolled in McMurray College in Abilene, TX, earning his bachelor’s degree in accounting. For several years, he was an accountant for Pepsi Cola in Abilene. Following this, he became self employed as an IT specialist setting up computer systems. During his retirement, he was an active communicant of St. Mary’s Church in Wells, ME, where he served as the parish accountant for several years.

In his free time, he enjoyed astronomy, bass fishing, golf, and crossword puzzles. He was a member of the Astronomy Club and was a Hibernian. He became a late blooming “cat” person with the adoption of “Penny” who has been lovingly welcomed into his daughter’s feline family

He will be lovingly remembered by his 3 daughters, Karen Robertson of Wells, Maine, Kathleen Smith and her partner, Suni, of Laguna Vista, Texas, and Kelli Spencer and her husband Louis, of Benbrook, Texas; his 2 sons, Michael McAuliffe and his wife, Sherri, of Abilene, Texas; and Kevin McAuliffe of Darien, GA; 12 grandchildren, and 15 great- grandchildren. He will also be missed by his brother, John W. McAuliffe of White Plains, NY.

A Graveside service with military honors will be held on Tuesday, August 25, 2020 at 2:00 p.m. in Arundel Cemetery, Kennebunkport, ME with Rev. Fr. Fred Morse officiating. Should friends choose, memorial donations in his name are encouraged to: The American Cancer Society, One Bowdoin Mill Island, Suite 300, Topsham, ME 04086.

To share a memory or leave a message of condolence, please visit Gerry’s Book of Memories Page at www.bibberfuneral.com

Receive notifications about information and event scheduling for Francis

We encourage you to share your most beloved memories of Francis here, so that the family and other loved ones can always see it. You can upload cherished photographs, or share your favorite stories, and can even comment on those shared by others.

Posted Aug 31, 2020 at 09:51pm
As a new member of the astronomy club I will always remember Gerry's easy and relaxed way he had when teaching me and others about the night sky. And then as club treasurer quietly showing me how important the supporting roles are to the joy of a volunteer organization. Ron Burk
Comment Share
Share via: 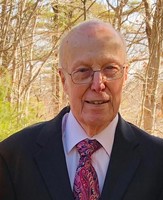