To leave condolences for John Schwartzman's online memorial, sign in using one of the following options:

He received his undergraduate degree from the University of Virginia and later his Masters and Ph.D. from New York University. Early in his career, John worked for the New York City Planning Department. Following this John was employed by the Bank of New York before spending the majority of his career working in finance at Citibank. John had a passion for education and spent many years teaching graduate classes at Hofstra University in New York. In 1992 John published Forecasting Interest Rates which teaches a proven, easy-to-use system for determining rate trends in finance.

John was an avid reader, lover of jazz music had a great interest in history and was a strong supporter of his grandchildren in their athletic careers. Pop is remembered by his wife, children, and grandchildren for always reading the New York Times and dousing his food in Old Bay Seasoning. John also loved dogs and never failed to check in on how his granddogs were doing. He was a devoted sports fan, not only supporting his 6 grandchildren but also supporting the New York Yankees and Giants. John also spent many years volunteering for a variety of organizations including, the New York Society for the Deaf, Nassau County Holocaust Museum, Docent - Narrow Gauge RailRoad, United Jewish Appeal, and the Platelet Society. John spent the majority of his life living on Long Island in New York and moved to Portland Maine with his wife in 2010.

Family and friends are invited to attend a service on Tuesday, August 11 from 11:00-12:30 at Bibber Memorial Chapel, 67 Summer Street, Kennebunk, ME. In lieu of flowers, the family is requesting that donations be made to the Good Shepherd Food Bank, 3121 Hotel Road, Auburn, ME 04210 in John’s memory.

"Life moves pretty fast. If you don't stop and look around once in a while, you could miss it." FB

To share a memory or leave a message of condolence, please visit John’s Book of Memories Page at www.bibberfuneral.com

Posted Aug 10, 2020 at 09:00am
Mrs. Schwartzman, Joe and Edie, Peter and Anne, and all the kids - my deepest, heartfelt sympathy on the passing of Mr. Schwartzman. I'll always remember our personal chats. Family, sports, life in general. He was such a wonderful man, and I am thankful to have known him. Love to you all. -Matt
Comment Share
Share via:
ED

Posted Aug 08, 2020 at 07:43pm
Condolences to my dearest friend, Sheila, and family. I will truly miss John, whom I’ve known most of my adult life, and he will never be forgotten. He was a kind, lovable person with a good heart. May his soul Rest In Peace.
Elaine
Comment Share
Share via:
DP

Posted Aug 08, 2020 at 04:12pm
Many people go through life in a quiet manner hoping to survive and achieve wherever possible. Others strive to accomplish many great feats. John went a step above ; he enjoyed his journey of life by carving a pathway to creating a better world. He did this via his depth of knowledge and deep love of family.
It was an honor to have had John in our lives. We will miss his presence and his spirit.
May you truly Rest In Peace , John.
Doris and Stan Pollack
Comment Share
Share via:
JD

Posted Aug 08, 2020 at 02:43pm
"Grammaw". John frequently call Sheila by this name and while I dont know its origin, outside of the obvious, it was always with a variety of inflections when he used it. Sometimes it was meant as a term of endearment, sometimes It was because he thought she was maybe being a little ridiculous, and sometimes it was just in a casual everyday way of having conversation with Sheila. No matter when he used it I enjoyed hearing it because it spoke of a love and connection that had endured for 56 years. I will miss you my friend.
Comment Share
Share via: 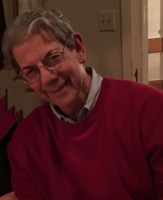