Order a Book of Memories™
for Your Loved One
Learn More

We are here to help you. If you have need of our services, please call us, day or night. Or, if you prefer, you can fill out the form on the right.

Are you thinking about pre-planning your funeral? Pre-planning is the best way to choose how you're remembered, to ease the emotional and financial burden on your loved ones, to protect yourself from rising funeral costs, and to let your family know your final wishes.

We provide our families with an open door policy. Please feel free to contact us 24 hours a day.

We provide our families with an open door policy. Please feel free to contact us 24 hours a day.

To leave condolences for Marjorie O'Keefe's online memorial, sign in using one of the following options:

Provide comfort for the family of Marjorie O'Keefe with a meaningful gesture of sympathy.

We encourage you to share your most beloved memories of Marjorie here, so that the family and other loved ones can always see it. You can upload cherished photographs, or share your favorite stories, and can even comment on those shared by others.

Posted Oct 27, 2019 at 11:12am
I've had the wonderful pleasure to live next door to Marjorie and Alan on Sea Rd. for the last 2 decades. I've so enjoyed her telling me stories of her younger years where she worked and her abroad travels. The way she would remember the fine details of her trips made me feel like I was there with her. I always imagined someone could make a movie about her life. Her accomplishments throughout her life were commendable and she always encouraged me to follow my dreams too. I'm sad that she has passed on but I want her family to know that she was a blessing in my life and I was lucky enough to live right next door. 100 years....an amazing life.
Comment Share
Share via: 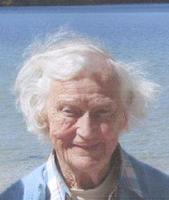