To leave condolences for Mary Jo Paiva's online memorial, sign in using one of the following options:

Provide comfort for the family of Mary Jo Paiva with a meaningful gesture of sympathy.

Print
Mary Jo (Thommas) Paiva, 68, of Wells, passed away Saturday, March 14, at Wentworth-Douglass Hospital in Dover, NH, after a brief but feisty battle with cancer.

Mary Jo was born in Manchester, NH, on August 6, 1951. She was a 1969 gradua... Read More
Mary Jo (Thommas) Paiva, 68, of Wells, passed away Saturday, March 14, at Wentworth-Douglass Hospital in Dover, NH, after a brief but feisty battle with cancer.

Mary Jo was born in Manchester, NH, on August 6, 1951. She was a 1969 graduate of Nashua (NH) High School, and was a Licensed Practical Nurse. She was employed at The Lodges in Springvale as the site administrator for over a decade. She previously worked at Huntington Common, in Kennebunk, and Kennebunk Nursing Center.

Mary Jo leaves behind her high school sweetheart and husband of 34 years, Kenneth C. Paiva of Wells. Mary Jo and Ken enjoyed over 50 years of laughs, tears and memorable times together. Whether it was in a tiny apartment in Boston, a condo on the Seacoast or the home they built together in Wells, Mary Jo and Ken were always side by side. They knew each other as well as they knew themselves, sometimes better. She was Lucy to his Ricky.

Mary Jo was an accomplished needle worker, a great cook and enjoyed long walks along the seashore with Ken and their dogs. She had a passion for helping the elderly through the later years of their lives and treasured every interaction with her residents at the Lodges.

Mary Jo was predeceased by her parents Robert and Virginia Thommas, of Nashua, NH.

Mary Jo’s family would like to thank the wonderful staff at the Lodges for their constant support and the Mass General and Wentworth-Douglass hospital departments of oncology for their kindness and care.

Receive notifications about information and event scheduling for Mary Jo

We encourage you to share your most beloved memories of Mary Jo here, so that the family and other loved ones can always see it. You can upload cherished photographs, or share your favorite stories, and can even comment on those shared by others.

Posted Mar 19, 2020 at 07:09pm
Mary Jo will be greatly missed in our out-law club. Her sense of humor and smile will remain in my memories.

Posted Mar 17, 2020 at 10:57pm
Mary Jo was a member of the Hilltop House (Provincetown) Class of Summer 1975. It was a magical summer and the bonds we forged proved to be marvelously enduring. John M, Earl, and David all went before her. The remaining alumni - John D, Tim, Debbie, Sean and I - are all devastated. She was special.
Comment Share
Share via:
DB

Posted Mar 17, 2020 at 11:28am
My Thoughts, Prayers but most of all my Heart goes out to you Kenny and all who’s Life were touched by this Beautiful Soul. May the Rest, Peace and Love that Mary Jo has now found, also reside in each of your Hearts. My Deepest Sympathy, From Morrisville, VT. Denis Boudreau
Comment Share
Share via:
PS

Posted Mar 16, 2020 at 06:43pm
So sad to read of Mary Jo’s passing. She was a caring, compassionate nurse and administrator at the Lodges. She always had a ready smile and was so genuine. My condolences to her family members and loved ones. The world certainly looks different when someone like MJ leaves it. RIP
Comment Share
Share via:
TH 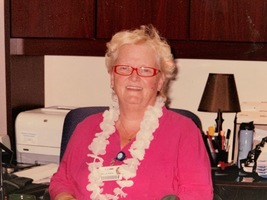