To leave condolences for Ruth Hall's online memorial, sign in using one of the following options:

Ruth worked for many years at Strafford National Bank as a secretary. When not working, she was an accomplished trainer of trotting horses. She and Ed traveled the fair circuit, cheering (and betting) on the horses she had trained. Ruth loved just being around horses. She was a past member of the U.S. Trotting Association. Ruth also enjoyed stamp collecting, knitting, needlepoint, trips to the casino with Ed, and traveling.

In addition to Ed, she was predeceased by her son, David Hall, and her brother Frank Davis.

Services and burial will be private.

To share a memory or leave a message of condolence, please visit Ruth’s Book of Memories Page at www.bibberfuneral.com.

Receive notifications about information and event scheduling for Ruth

Print
Services will be private.

We encourage you to share your most beloved memories of Ruth here, so that the family and other loved ones can always see it. You can upload cherished photographs, or share your favorite stories, and can even comment on those shared by others. 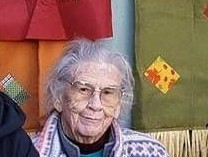